In MyMailbox (IMM) is a weekly feature organised by The Story Siren. IMM is a post where you can show which books entered your house and it also gives you a chance to say thank you to the people that kindly sent them. To find out more about how you can join in click here.
Before I begin my post, I must tell you that I did attend the Random House Children's Books Brunch yesterday, where I did get some fabulous books. Unfortunately, I haven't had time to add them all in due to one of children being poorly, but I intend to show you those books next week. As you may have guessed this  post was prepared before I went to the event. 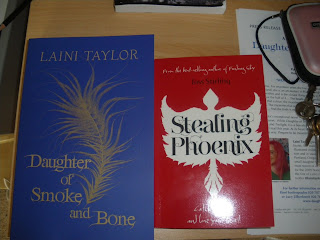 
Book summary
Around the world, black hand prints are appearing on doorways, scorched there by winged strangers who have crept through a slit in the sky.

In a dark and dusty shop, a devil's supply of human teeth grown dangerously low.
And in the tangled lanes of Prague, a young art student is about to be caught up in a brutal otherworldly war.
Meet Karou. She fills her sketchbooks with monsters that may or may not be real; she's prone to disappearing on mysterious "errands"; she speaks many languages—not all of them human; and her bright blue hair actually grows out of her head that color. Who is she? That is the question that haunts her, and she's about to find out.
When one of the strangers—beautiful, haunted Akiva—fixes his fire-colored eyes on her in an alley in Marrakesh, the result is blood and starlight, secrets unveiled, and a star-crossed love whose roots drink deep of a violent past. But will Karou live to regret learning the truth about herself?
**********
Stealing Phoenix by Joss Stirling published by OUP Oxford in September and is the second book in Joss Stirling's series. The first book Finding Sky was one of my favourite reads last year. To read my review, please click here.

Book summary
What do you do when your soul mate turns out to be a thief? Steal her, of course. Phoenix was raised within the Community, a gang of thieves with paranormal powers, under the control of a harsh master known as the Seer. The notion that there's a soul mate out there for every person with a paranormal gift is mere myth in Phoenix's world. That is until the Seer gives Phoenix the details of her next target, Yves Benedict. He's more than just her next victim, he is her destiny. To be together, Phoenix must break away from the Community but resistance against the Seer puts them both in mortal danger. Phoenix has never trusted anyone before, now it's time to trust Yves with her life. 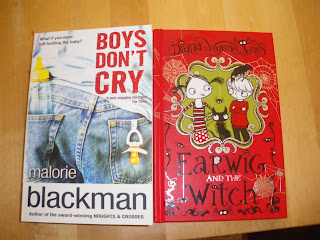 Boys Don't Cry by Malorie Blackman which I won from Random House Childrens Books. This has just been brought out as a paper, so very excited by this one.
Book summary

You're waiting for the postman - he's bringing your A level results. University, a career as a journalist - a glittering future lies ahead. But when the doorbell rings it's your old girlfriend; and she's carrying a baby. Your baby.
You're happy to look after it, just for an hour or two. But then she doesn't come back - and your future suddenly looks very different.
Malorie's dramatic new novel will take you on a journey from tears to laughter and back again.

**********
Earwig and The Witch by Diana Wynne Jones - this quite a sad book to be reading as it is the last one she wrote before she passed away. Published by HarperCollins Childrens Books
Book summary

Everyone knows that orphanages are horrible places. But Earwig has a surprising amount of power over everyone else at St Morwald’s Home for Children, and loves it there. So the last thing she wants is to be sent to live with the very strange Bella Yaga…
Earwig was left at St Morwald's as a baby. Unlike the other children, she loves it there, mostly because she has the run of the place and seems to be able to persuade people to do as she wants. Then one day Earwig is chosen to live with a very strange couple: Bella Yaga, her new 'mother', is actually a horrible witch. Earwig will need all her ingenuity (and some help from a talking cat) to survive…
With terrific line drawings that perfectly complement Diana’s witty, magical story, this is sure to appeal to a new generation of fans.


All gorgeous books, causing immense shuffling in the TBR pile!
at July 10, 2011