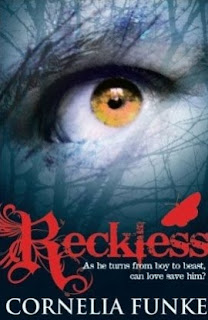 The night breathed through the apartment like a dark animal. The ticking of a clock. The groan of a floorboard as he slipped out of his room. All was drowned by its silence. But Jacob loved the night. He felt it on his skin like a promise. Like a cloak woven from freedom and danger.
Goodreads Summary


For years, Jacob Reckless has enjoyed the Mirrorworld’s secrets and treasures.
Not anymore.
His younger brother has followed him.
Now dark magic will turn the boy to beast, break the heart of the girl he loves, and destroy everything Jacob holds most dear. . . .
Unless he can find a way to stop it.
*********


I can always tell when I am reading a Cornelia Funke book. You could take away the front cover and hide her name but I would still know she had written it. She has such a uniqueness to each fantasy world she creates. She is fantastic at creating a fairytale world that has the darkness of Grimms Fairytales hidden within it. I could easily place this book in the same world as the Inkheart series as those books have that similar fairytale darkness.  I really enjoy Cornelia Funke's unique development of portals into her imaginary worlds.  This world is reflected through a mirror which transports you to the other side just by touching it. Wouldn't if be lovely if we could really step into another world with such ease and quite by accident.
I loved this book as soon as I read the first chapter. Jacob is definitely a character that is reckless by name and nature. He is dangerous and will stop at nothing to get what he wants. With his brother's arrival in the strange world he sees as home, Jacob has to deal with emotions he hasn't coped with for years. He is in a difficult quandary which sets him off on a perilous journey to save his brother.
I found the characters all to be so well written and unique. I loved Evenaugh Valiant, the dwarf who had nearly led Jacob to his death. I couldn't help but imagine Martin Short playing the part in a film version of it. The character had so many of his comical tendencies I have seen brought to life so many times before.   The Fox was a gorgeous character too; her loyalties to Jacob are so strong, she will stop at nothing to protect him.

I thought the creation of the Goyl was thoroughly originally. This breed' s appearance was made of different precious stones and could be recreated by the Dark Fairy who had the ability to turn humans into stone people. I haven't read anything similar to this before and I found it fascinating.
The story was extremely fast paced. Jacob could give Jack Bauer from 24 a run for his money as he raced against time to stop his brother from dying. I found that the action never let up leaving you quite breathless by the end.
This is a fast, action packed read in a dark fairytale world that has the classic uniqueness of Cornelia Funke sewn in.
I have just discovered that this is the first book in a trilogy, which I am really excited about now. Cornelia is excellent at tying up any loose ends within her books, so I am no intrigued as to where the story will go from here.
at July 19, 2011