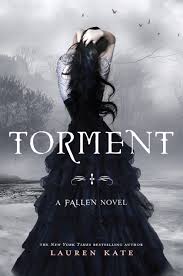 Pages 452
Book published in 2010 by Random House Children's Books.
Book: My Own Copy.

Daniel stared out at the bay. His eyes were as gray as the thick fog, enveloping the Sausalito shoreline, as the choppy water lapping the pebble beach beneath his feet. There was no violet to his eyes now at all: he could feel it. She was too far away.
Goodreads Summary
Hell on earth. That's what it's like for Luce to be apart from her fallen angel boyfriend, Daniel. It took them an eternity to find one another, but now he has told her he must go away. Just long enough to hunt down the Outcasts - immortals who want to kill Luce. Daniel hides Luce at Shoreline, a school on the rocky California coast with unusually gifted students -Nephilim, the offspring of fallen angels and humans.

At Shoreline, Luce learns what the Shadows are, and how she can use them as windows to her previous lives. Yet the more Luce learns, the more she suspects that Daniel hasn't told her everything. He's hiding something - something dangerous. What if Daniel's version of the past isn't actually true? What if Luce is really meant to be with someone else?

**********
I have to be honest and admit that I didn't love the first book in the series Fallen as much as everyone else did. I couldn't cope with the depressing school Luce attended with its Machiavellian practices. However, I am pleased to confirm that I absolutely loved this second book in the trilogy.
As soon as Luce arrives at Shoreline, it was like a weight had been lifted off my shoulders. The school became a character in itself, but a much more laid back, kind of cool place to hang out. I could imagine myself watching the ocean with my cappuccino on the sunny terrace. It was simply gorgeous and Lauren's vivid descriptions made them easy to conjure up in my mind.
The new characters that attended school with Luce really stood out this time. Shelby, had similar tendencies to Molly from the first book, but she definitely had a kind heart hidden within. In fact, she quickly became one of my favourite characters within the book. Miles was a bit of a contender, when it came  to who won the heart of the most sought after girl in eternity. You have to give him a huge amount of credit for attempting to win Luce's heart away from her supposed destiny.  I found myself disliking Daniel quite a bit in this book, as his controlling nature made me feel suffocated for Luce. I know he is desperate to hold onto Luce this time, but please, give the girl some slack. She doesn't have all the prior knowledge he does and needs to figure out her past for herself.
I loved the appearance of the Announcers. They reminded me a little of the portals in the Harry Potter books. However the Announcers are extremely unique in their ability to replay actual events from the past. Who wouldn't like the opportunity to get their hands on one of those?
I loved the amount of detail that was included which dealt with the relationships between the angels, demons and the fallen. It really did satisfy my lust for angel knowledge and folklore. From Lauren's passages you are presented with a situation where there may be no actual right side between heaven and hell. Each has a reason for existence and nothing is truly as we believe.
The book had a dramatic ending, just like the first one, however there was quite a twist to it, leaving me shocked by the turn of events. Luce shows just how capable she really is of taking control of her own life and making her own decisions, which is something she seemed to lack in the first book. She shows a thin streak of defiance at the beginning of the book, which just widens as her past falls into place for her.
I am so pleased I waited to read the last two books together, because I would have been upset to finish on such a cliff hanger and be left waiting around for the next book. This series just keeps on  getting better!
at July 15, 2011