The Gallows Curse by Andrew Hammond 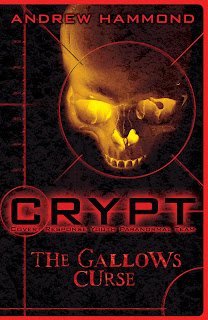 In the darkness of the underground, among the bats and the spiders and the rats, another train thundered down a neighbouring tunnel.
People read their newspapers. Some tried the crossword. Two kids argued over who was having the last Haribo. A woman shuffled in her seat and dropped her folder of papers. They splayed out over the floor. Letters from clients. Telephone messages. Conference notes. Doodles on pad. A day's work.

Goodreads Summary
Meet Jud Lester: Paranormal Investigator. When a crime is committed and the police are at a loss, the Covert Response Youth Paranormal Team (or CRYPT for short) is called in to figure out whether something paranormal is at work. Jud is their star agent. Jud, unwillingly paired with new recruit Bex, has just landed his biggest case yet...people have been disappearing in mysterious circumstances while others are viciously attacked - yet there are no suspects and a complete lack of hard evidence. The only thing that links each attack is the fact that survivors all claim that the culprits were 17th century highwaymen. Can Jud and Bex work out what has caused the spirits of these dangerous men to return to the streets of London before they wreak more death and destruction?

*********
After reading this book, I was convinced that I would never travel on the London Underground again!
This book has to be the most goriest, scariest book I have read this year. I would have freaked out completely if London had ever suffered the scenarios described in this book. It was gruesome, grotesque and barbaric and I LOVED every minute of it!
The characters are really intense. Especially Jud, who has every reason to be and takes his role as a paranormal investigator extremely seriously. You want him to lighten up just a tad, but you can see why he can't as he is living a lie and the guilt is eating away at him. Zakis, the billionaire property owner was ruthless and his actions were rather sickening - I really didn't like the way he treated people, fortunately he got his comeuppance.
The chapters are short and sharp, adding to the intenseness of the story. You find yourself quickly gasping at each situation as you race from one to another.  The evil in the book just builds and builds with so much tension until you feel it erupting. As the book progresses all the hauntings and gruesome attacks begin to make sense as Jud and Bex work out why these events are happening. It is like a child's dot to dot, when all the events are placed together, you understand why they are happening. These are some seriously angry ghosts.
If you love gore and gruesome thrillers,then this book is definitely for you. A brilliant debut from hopefully a series that will continue.
Think Pirates of the Caribbean meets Hellraiser!
at August 27, 2011