In MyMailbox (IMM) is a weekly feature organised by The Story Siren. IMM is a post where you can show which books entered your house and it also gives you a chance to say thank you to the people that kindly sent them. To find out more about how you can join in click here.
Hello my lovelies! Have you missed me?
I have been away all week in Devon with my family. I would love to say it was fabulous, but I would be lying as the weather was extremely rubbish and made us feel like caged animals. That will teach me to put my trust in the UK weather.
Anyway, it was lovely to return home and discover a huge stack of parcels just waiting for me to open. 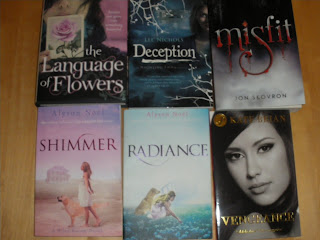 1) The Language of Flowers by Vanessa Diffenbaugh - You have to agree with me on the cover lusting here on this one. It is rather WOW! This book is released by Macmillan on the 18th August and was subject to a nine publisher auction last year.

2) Deception by Lee Nicholls . This a new series to be published by Bloomsbury  going under the series title of Haunting Emma. Bloomsbury are also bringing Betrayal out too which is the second one in the series.

3) Misfit by Jon Skovron - I love this cover too. This is published in August by Abrams and Chronicle Books,   an American publisher who have recently set up an office in the UK. This one is a paranormal book recommended by the fantastic Holly Black.


4 + 5) Shimmer and Radiance by Alyson Noel. These are the first two books in her Middle Grade Riley Bloom series. Shimmer was released on the 5th August.

6) Vengence by Kate Brian - This is the final installment in the scandalous Private series. I haven't read any of these but I understand that they are excellent for Gossip Girl fans. Will this book read as a standalone? We will see. 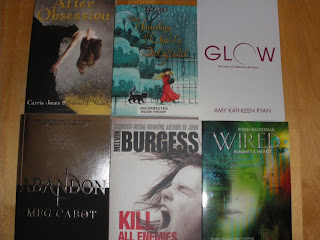 8) The Haunting of Charity Delafield by Ian Beck. I am quite excited by this book, as it was mentioned  during the Random House Blogger Event. Ian Beck is well known as an illustrator and actually created Elton John's Yellow Brick Road album cover. This book tells the story of a Charity growing up in a vast, isolated house.

9) Glow by Amy Kathleen Ryan is published by Macmillan in October. A little bit of dystopian fiction for the winter as I delve into the first book in the Sky Chasers trilogy.


10) Abandon by Meg Cabot. Just going to squee here for a bit! Published by Macmillan on the 1st September. Set on the moody storm battered island off the coast of Florida, Abandon is the first book in the brand new seductive trilogy. This book utilises the story of Persephone and Haydes.

11) Kill All Enemies by Melvin Burgess - there is a huge blog tour for this book occurring very soon, so do watch out for it. This book is released by Penguin in September. This book is described as hard hitting, shocking and powerful, written by the godfather of teen fiction.

12) Wired by Robin Wasserman is published by Simon and Schuster in August and is the third and final book in this science fiction series. This whole series has slipped under my radar, so I am looking forward to reading it. 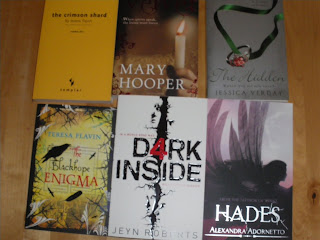 
15) Velvet by Mary Hooper. I loved Fallen Grace which I read recently and I am very excited to be taking part in the blog tour for this book. It is released on the 5th of September by Bloomsbury and is also set in the Victorian period.


16) Dark Inside by Jeyn Roberts is released in September by Macmillan. This book sounds a little too real. Moments after several huge earthquakes shake every continent on the Earth, something strange begins to  happen. An inner rage has been released and some people cannot fight it....


17)The Hidden by Jessica Verday is the third and final book in she Sleepy Hollow series and is release in September.


18) Hades by Alexandra Adornetto. This is the second book in the Halo series and Kirsty from The Overflowing Library has kindly lent to me in return for a review. I really enjoyed Halo, so I am looking forward to reading this one.