Kiss At Midnight by Eloisa James 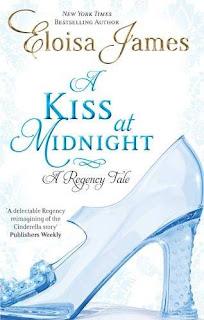 Once upon a time, not so very long ago.....
This story begins with a carriage that was never a pumpkin, though it fled at midnight; a godmother who lost track of her charge, though she had no magic wand: and several so-called rats who secretly enjoyed wearing livery.
And, of course, there's a girl too, though she didn't know how to dance, nor did she want to marry a prince.

**********
Goodreads Summary
Miss Kate Daltry doesn't believe in fairy tales . . . or happily ever after.
Forced by her stepmother to attend a ball, Kate meets a prince . . . and decides he's anything but charming. A clash of wits and wills ensues, but they both know their irresistible attraction will lead nowhere. For Gabriel is promised to another woman—a princess whose hand in marriage will fulfill his ruthless ambitions.
Gabriel likes his fiancée, which is a welcome turn of events, but he doesn'tlove her. Obviously, he should be wooing his bride-to-be, not the witty, impoverished beauty who refuses to fawn over him.
Godmothers and glass slippers notwithstanding, this is one fairy tale in which destiny conspires to destroy any chance that Kate and Gabriel might have a happily ever after.
Unless a prince throws away everything that makes him noble . . .
Unless a dowry of an unruly heart trumps a fortune . . .
Unless one kiss at the stroke of midnight changes everything.
***********
Before talking about the book itself, I have to mention the cover. It is utterly gorgeous and probably one of the main reasons I decided to actually read this book. I just find it so magical to look at. I must also point out that it states in the author's biography, that she is married to a real Italian knight!
As you might have already realised this book is a 'Regency style re imagining of the story of Cinderella'. It follows the story extremely loosely but is cleverly told none the less. This book is not for the easily shocked as it  does contain some rather hot and heavy scenes of the sexual nature. Definitely not one to be read on the train, if you suffer from extreme blushing!
I loved Kate as a character. Her humour was just endless. Here is one of my favourite lines within the book.
After four hours in the carriage with Lord Dimsdale, Kate decided that the most interesting thing about Algernon was that he wore a corset.
Kate is extremely modern in her way of thinking and was a breath of fresh air within the book. You could not help but love her and want her to succeed in life.  I adored the way she began to take a stand and show her true strength of character. She just shone out as the  most amazing character in the book. Henry, Kate's godmother, was also a brilliantly written character and could have easily been transported to any of our modern day sitcoms as the older woman, who stills sees herself in the prime of her life. She has had a good life and continues to enjoy it at its fullest, even if her body might be groaning a little and putting up some resistance.
The book is full of bawdiness and wickedness, as well as a severe amount of double crossing. It actually reminded me quite a lot of Shakespeare's 'The Taming of the Shrew'. ( I can tell you are now shocked to read that I have ACTUALLY read The Taming of a Shrew, but I can inform you it was not my choice; I studied it for English 'O' level.) The bickering between Kate and Gabriel is just hilarious as they constantly try to outwit each other in the beginning of the book. It was so entertaining to watch their dislike for each other blossom into love via a fair amount of playful banter.
The imagery and the metaphors used really stood out for me.The way the Prince's castle was described was quite breathtaking and made me yearn to visit. I also found quite a few of the metaphors just so original and humorous.
The only niggle I have with this book, is during the middle part I found a particular scene seemed to drag on a little, but once I was past that, I found myself completely engrossed in the budding relationship of Kate and Gabriel.
If you love historical chick lit, then this book is for you. Be prepared to blush as the hot and heavy scenes.
at August 20, 2011