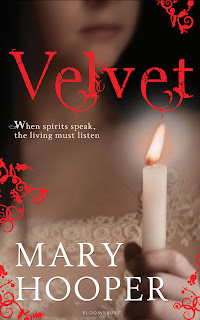 Welcome to the second stop on the Velvet Blog Tour, celebrating the publication of Mary Hooper's new book 'Velvet'.  If you missed the first stop at Wondrous Reads, then please click here. Mary Hooper has written a delightful post where she talks about where she got her inspiration for Velvet from. 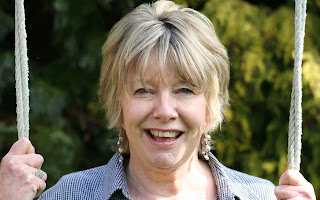 My Inspiration for Velvet
Like most people at some time in their lives, I’ve visited fortune tellers and been to theatre events where a medium purports to receive messages from the ‘Other Side’. Attending these, I’d very much hoped that I would be selected by the medium and receive a meaningful message; something inspiring and uplifting. Unfortunately this has never been the case for me. What usually happened was that, after giving one or two messages that seemed to mean something to certain members of the audience (had they been planted there? my suspicious mind wondered), the medium resorted to asking basic questions, such as if any in the audience knew someone in spirit called, say, Fred, or John, or Anne. Of course, most people did know someone deceased who had one of these not very unusual names, and it wasn’t difficult to fabricate stories around them: the medium reported that Uncle Fred had had a great sense of humour, or Cousin John had enjoyed gardening, or Anne had been a dab hand at cooking. Never did I hear any message which amazed me, or any communication which could only have come from ‘beyond the grave’.
I went to two more theatre events when I was writing Velvet, rather hoping that the spirits might know that I was planning to write a book about them and turn up to give a good performance. As before, however, I didn’t hear anything which convinced me that someone on the Other Side could make contact. At the first event the medium asked (rather desperately, for no one had ‘owned’ any of the spirits who had come through) if there was someone in the audience with a black handbag, and more than three quarters of the audience raised their hands, and then looked around at each other and laughed nervously. At the second event the medium and his assistant were waiting in the foyer of the theatre to greet, talk with and put the audience at their ease, rather like Velvet does with Madame Savoya’s clients.
I began to wonder if it had always been thus. Had anyone ever really and truly received a message from the Other Side, or was mediumship more about intuition and clever talk? Either way, I thought the subject would make an interesting book, especially if I set it in the heyday of spiritualism, the Victorian and Edwardian periods.
I’d like to mention the naming of my main character. The first thing I do when I plan a book is to decide the main character’s name. As part of my research I looked at a list of girls’ names popular in Victorian times, but some of them I’d used in books before (Hannah, Lucy, Grace, Lily and Rose) and some I just didn’t like very much (sorry – Maud, Agnes, Bertha and Mildred). When I saw the name Velvet I knew I’d found exactly what I wanted. Then when I started writing the book I discovered very quickly that Velvet hadn’t always been called that – in fact, she’d started life as Kitty, and the reason for this change of name became part of the story.
As I wrote, the plot crowded about me, waiting to be used. I already knew the main story was going to be about a fraudulent Victorian medium, but I also wanted to incorporate a love story, and to use something I’d come across when I was researching Fallen Grace (set about forty years earlier), and that was baby farms. There are, in fact, several books waiting to be written about baby farms, but I’m not the person to do them; I found it impossible to read about the subject without getting upset and angry about what had been allowed to happen. Perhaps the worst thing about them is that baby farms were still in existence only a hundred years ago.
All this research was important for the book, but perhaps the single most important discovery I made was that every Victorian or Edwardian medium was accused of fraud, and that only one of these was not convicted of any wrongdoing. I am not saying that speaking to spirits is impossible, just that I haven’t seen any evidence of it. I will certainly report back if I do.
I hope you enjoyed that post and were left pondering your beliefs in spiritualism. I want to thank Mary for such an interesting post.


How would you like to win  a copy of everyone of Mary Hoopers books? One lucky UK entrant will receive a copy  of each of the following books:

At the Sign of the Sugared Plum,
Petals in the Ashes,
The Remarkable Life and Times of Eliza Rose,
At the House of the Magician,
By Royal Command,
The Betrayal,
Fallen Grace
and Velvet
To enter, please fill in the form. I must stress again, this is UK entrants only. Competition closes on the 13th September 2011.

Would you like a little more? How about an extract from Mary's new book Velvet?
OK, but you will have to pop back at 2pm to read the first chapter of Velvet!
at September 06, 2011