My Favourite Witches - Film and Television

I couldn't do a whole week about witches without listing all my favourite ones on TV and  in films. That would be just so wrong. So here is a list of the witches that I either love  or love to hate.

1) The Halliwell Sisters from Charmed - my list would always start with these fabulous ladies. Prue, Piper, Pheobe and Paige got me through the first few years of motherhood! I am serious. Having twins severely affects your social life and sleeping patterns but these girls would always be there to keep me going. I have watched all eight seasons of the series and I was so upset to see it finish. I cried when Prue died in it ( Shannon Doherty) as she was one of the main reasons I started to watch it as I had been a huge Beverly Hills 90210 fan and I was really upset when when she was booted out. So I was delighted to find her in Charmed which was also produced by Aaron Spelling. When Prue left the series Paige stepped in and did a might fine job of helping the girls fight evil. If you haven't ever watched this series then you really need too! Julian McMahon as Cole, that is all I am saying.

2) The Owen Sisters from Practical Magic. Oh how much do I love this film. I have watched it over and over again. This is the film version of the book of the same name written by Alice Hoffman. Gillian and Sally come from a long line of cursed witches who can never find real love. Sally goes out of her way to get around this little curse. Some really dark moments in it. Also some amazing acting on behalf of Stockard Channing, who you might remember as Rizzo from Grease. 3) The Sanderson sisters from Hocus Pocus. These witches are a hoot. I just love this film. I would say Sarah Jessica Parker is probably my favourite sister of the three as she is just so daft in the film. This was a Disney film set around Halloween. It tells the story of Max, who absolutely hates witches and yet manages to bring back to life this gorgeous goofy  trio! 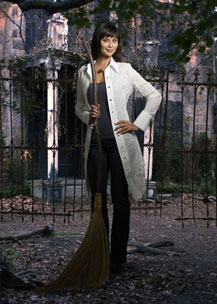 3) Cassandra Nightingale from The Good Witch films. Catherine Bell starred in these Hallmark films that were made for TV. They seem to make one a year and I love them all. She is a mysterious lady who moves to a small town, living in an abandoned house which is believed to be haunted by the Grey Lady. The villagers would rather she left but the local Sheriff has a soft spot for her.

4)Alexandra and Camryn from Twitches. The films in this series were based on the Twitches books by Scholastic. The girls were separated at birth to keep them safe, but when darkness attacks their homeland, they are called together to fight it.
I watched Tia and Tamara many years ago in the hit Disney series, Sister, Sister, just before I gave birth to identical twin girls myself, so I have always had a bit of soft spot for these too. Definitely one to watch. 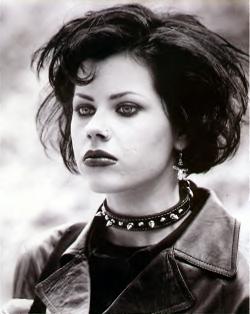 5) Nancy from The Craft. Look what the lovely little girl from The Return to Oz grew up to be.  A nasty little witch. Faruza Balk really knows how to be a bad witch.  Nancy is definitely one of my most scariest witches in the post as she is just plain evil. This film was released in 1996 and followed four young teenage girls as their interest in witchcraft grew. They were doing find until they began to use it for their own gains. Eeep! 6) Lamia in Stardust. I am sure Michelle Pfeiffer is a witch in real life as she never grow old! Still looking gorgeous,she plays an ancient witch who with her two sisters seeks the heart of the fallen star to grant them eternal youth and beauty.

7) Aggie from Halloweentown. Aggie is the type of cool witch you would want as your grandmother. Debbie Reynolds plays this quirky witch whose daughter disapproves of her unusual talents. The Disney Channel began making the Halloweentown films in 1998 to celebrate Halloween. Every Halloween, my girls and I watch these films on the Disney Channel; they are timeless and the whole family will love them. 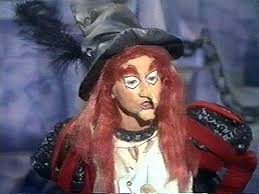 8) Wilhelmina W.Witchiepoo from H.R. Pufnstuf. This was one of my favourite films as a kid. Jimmy       (Jack Wild) owns a magic flute which leads him to a magical boat. Little does he know the boat belongs to Witchiepoo and she is going to kidnap him. I am not sure if this film is still available as I haven't seen it for years, but I have such fond memories of it.

9) Sabrina the Teenage Witch. Sabrina was definitely one of the coolest witches when I was growing up. I loved her cat Salem too; always thought that was such a cool name for a cat! This was an American sitcom that was originally based on the Archie comics. The show starred Melissa Joan Hart who was a fabulous teenage witch growing up with her Aunt's Zelda and Hilda. The aunts were a hoot and Sabrina always seemed to be getting herself in trouble. 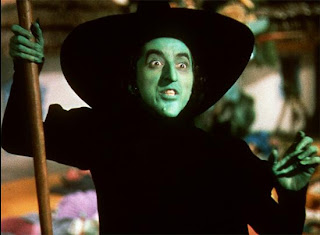 10) The Wicked Witch of the West - ultimately the Queen of Evil Witches. Apart from having the weird green skin colour, she is definitely the most well known and most hated witches of all time. Everyone must have watched The Wizard of Oz at least once in their life time and experienced this evil lovely.

Well that is my list of favourite witches. Now it is your turn.

Email ThisBlogThis!Share to TwitterShare to FacebookShare to Pinterest
Labels: the witches are coming, top ten