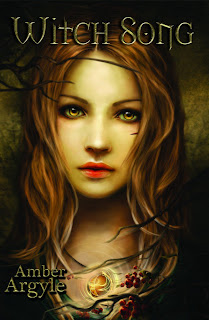 Brusenna's straw-coloured hair felt as hot as a sun-baked rock. She was sticky with sweat that trickled down her spine and made her simple dress cling to her. Her every instinct urged her to run from the glares that stung like angry wasps. She had already put off her trip to the market for too long.
The merchant finshed wrapping the spools of thread in crinkling brown paper. 'Twelve upice,' Bommer said sourly.
A ridiculous price, no doubt made worse by the drought. Had Brusenna been anyone else, she could have bartered it down to half that.

Goodreads Summary
The world is changing.
Once, Witch Song controlled everything from the winds to the shifting of the seasons, but not anymore. All the Witches are gone, taken captive by a traitor.
All but Brusenna.
Now the traitor is coming for Brusenna, and ever her guardian can't protect her. Somehow, Brusenna has to succeed where every other Witch has failed. Find the traitor. Fight her. Defeat her.
If Brusenna fails, there won't be anything left to save.
**********
This book is told from the point of view of Brusenna and you feel like a concerned mother as you watch this timid little thing take on a witch who has managed to defeat every experienced witch around. It almost felt like David and Goliath! However, as Brusenna charges forward in her mission, you watch her grow into a mature witch in a matter of months. In fact she becomes one butt kicking witch, who puts the rest to shame.  I loved her from the moment she entered the story and felt like a proud mother as she showed such strength of character in times of adversity.
I did get a little annoyed with her for continually shutting Joshen out, who basically was the best thing that have ever happened to her. This gorgeous guy basically throws himself at her and will do anything for her. He is brave and strong and she treats him like china!
There are some extremely lovable characters in this book; Bruke the dog, Stretch the horse and Pogg, who was rather a strange creature. Not sure I agreed with everything that happened to a couple of them in the book, but I will stay quiet as I don't want to spoil the story.
I thought the world building was excellent and I loved finding my way through to the Espen's domain. I felt the author created a very believable fantasy world.
When Brusenna came in contact with the older witches, I was so annoyed. They treated her so badly after she managed to save them all. They were rude and obnoxious and I think I would have put them back under the spell.
The songs the witches sing are beautiful and poetic in nature. I think the author must have dabbled at some point in poetry, perhaps she has a poem anthology hidden under her bed. The songs just flowed and made sense completely.
I really enjoyed accompanying Brusenna on her journey. I found the story built momentum as the book progressed, with twists in the story leading you down different avenues before the truth was revealed. A beautifully written journey to freedom. 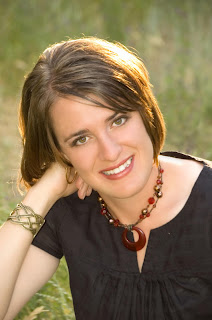 Amber Argylle has been really busy with touring so she wasn't available for a full  guest post. However she did manage to tell me why she wrote this book.
I wanted to take the ancient preconceived notion of chanting, dark witches and turn them into something beautiful. I transformed evil chanting into beautiful singing. Instead of twisting nature, the witches power supplements it. Plants grow from seedlings to trees in moments and seasons shift at the insistence of their songs.
The setting in Witch Song rings with resonance from the time of the Salem witches--they battle with flintlock muskets, sail in Spanish galleons, etc.
I think she did a beautiful job too!

Email ThisBlogThis!Share to TwitterShare to FacebookShare to Pinterest
Labels: amber argyle, the witches are coming