The Write Way with Celia Rees

Today I am pleased to feature one of my favourite YA authors, Celia Rees.

1) You  have written twenty books over the years, do you find the writing process  gets easier with each new book you write?
I've written twenty one, if you count my new book, This Is Not Forgiveness, which will be published in February, 2012. I don't find the writing process gets easier, because each book is different and presents a new challenge. Things get harder, if anything, as one sets higher goals. The more books you write, the harder it is to come up with fresh, new ways of describing things in words you haven't used before.
2) Out of all the books you have written, which one is your favourite?
I never answer that question! All my books are special to me, so it would be wrong to single one out.
3) As part of The Witches Are Coming week on my blog, I am reviewing the Sorceress and I wondered if you could tell us why you decided to write about witches? What drew you to the subject and where did you get your inspiration from?
I didn't make a conscious decision to write about witches or even to write a historical novel. I was looking through The Oxford Book of The Supernatural, researching a completely different book, when I came across an account of Mathew Hopkins, self styled Witch Finder General, who lived at the time of the English Civil War and went from town to town 'discovering' witches. I began thinking: 'What did it mean to be a witch? What if it was a kind of Western Shamanism, part of an ancient tradition of healing, of 'seeing', of shape-shifting? What if there was a girl being trained in this tradition by her grandmother. Someone like Matthew Hopkins comes to the village and does away with the grandmother. What will happen to the girl?'  That was the beginning.
4) What made you decide to write historical Young Adult books?
Once I'd had the idea for Witch Child, I knew I had to write it and since the events occurred in the 17th Century, it would be a historical novel. The other historical novels followed from this one, although I am always impelled by an idea. My next book is contemporary, because the idea I had was set now.
5) You have a new book called This Is Not Forgiveness coming out early next year, tell us a little bit about it?
This Is Not Forgiveness is a bit of a departure from the novels that I have been writing lately, although I have written contemporary fiction in the past. It began with an idea for a book about two boys and a girl, a love triangle if you like. I find most romances a little insipid, so I decided to up the stakes a little bit, sharpen the rivalry by making the boys brothers and very different from each other. One is older, and has been a soldier. This brought in a whole new aspect about the wars in Afghanistan and Iraq and protest politics. The girl is a passionate firebrand, a radical; the soldier is a firearms expert. Together they make an explosive combination. The younger brother loves both of them but how can he stop them from blowing everything apart?
6) The concept behind This Is Not Forgiveness is extremely interesting. What inspired you to write it?
I think I've already answered that above. It was interesting that when I first had the idea, people seemed to think that student protest was a thing of the past, but then, as I was writing it, there was rioting all over London and young people out on the street of every capital from Athens to Cairo.
7) What kind of research did you need to carry out before writing This Is Not Forgiveness and how long did it take you?
There was not a great deal of  research needed - soldiers' experiences in Iraq and Afghanistan, Post Traumatic Stress Disorder, radical movements in the '60s & '70s, read the newspapers, indie guitar bands...
8) Do you plan before you begin writing or just go with the flow of the idea in your head?
I do have a plan of sorts, but I don't always stick to it.
9) When writing, what is your daily word target?
I don't really have a daily target. I only write when I'm ready to, then I might write a lot. Another day, if there words aren't there, I won't write anything.
10) How long did it take you write the first draft?
Of This Is Not Forgiveness? Three months. It then went through several more drafts. This re-drafting is an important part of the writing process.
11) What do you normally do once the first draft is finished?
Send it off to the publisher for the editing process to begin. Sometimes, if there is not too much work to do in the re-drafting, I begin researching something new.
12) What are you planning to write next?
I have an idea but it is too early to discuss it.
13) When is your ideal time to write? Morning, afternoon or evening?
I guess morning, although if I need to, I can write anytime.
14) What authors inspired you whilst growing up?
I was a very keen reader, but don't think I was directly inspired because I had no ambitions to be a writer back then.
15) Who is your favourite author now?
Margaret Atwood
16) Being that this is a Witches special week on my blog, who is your favourite witch either in a book, film or TV programme?
Serafina Pekkala in Philip Pullman's His Dark Materials.
17) If you could have written any other book in the world, what would it be?
The Great Gatsby
18) What advice can you give to unpublished authors?
Read a lot. Keep writing. Be disciplined. Be prepared to re-write and re-write. Don't give up.
Thank you Celia for taking the time to join in with The Witches Are Coming 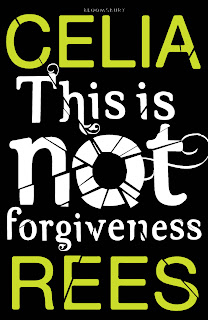 As Celia mentioned in the interview, she has a new book coming out in February 2012 called This Is Not Forgiveness.
Here is a summary of her exciting new book.
Everyone says that Caro is bad . . . but Jamie can’t help himself. He thinks of  her night and day and can’t believe that she wants to be his girlfriend.
Gorgeous, impulsive and unconventional, she is totally different to all the other girls he knows. His sister, Martha, hates her. Jamie doesn’t know why, but there’s no way he’s going to take any notice of her warnings to stay away from Caro.
But as Jamie falls deeper and deeper under her spell, he realises there is more to Caro – much more. There are the times when she disappears and doesn’t get in touch, the small scars on her wrists, her talk about revolutions and taking action, not to mention the rumours he hears about the other men in her life.
And then always in the background there is Rob, Jamie’s older brother, back from Afghanistan and traumatised after having his leg smashed to bits there.
Jamie wants to help him, but Rob seems to be living in a world of his own and is increasingly difficult to reach.
With Caro, the summer should have been perfect . . . but that isn’t how things work out in real life, and Jamie is going to find out the hard way.
To find out more about Celia visit her Facebook fan page here.
at November 04, 2011

Email ThisBlogThis!Share to TwitterShare to FacebookShare to Pinterest
Labels: celia rees, the witches are coming, the write way