At the end of November, I was lucky enough to be invited to the Atom Books blogger event. We were treated to lots of lovely cakes and wine, which quickly made me lightheaded!
We were then seated in one of their meeting rooms where they showed us all the lovely books they have coming out next year. 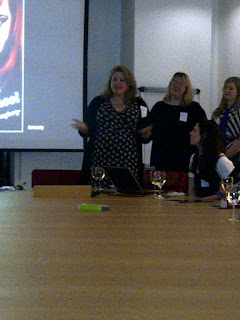 Whilst we were there we got to listen to two fabulous authors. First we got to hear from author, Christi Daugherty about her debut book - Night School, which came about after seeing the scary school her sister in law used to go to. Christi used to live in America until she got married, and has worked in publishing in the UK for quite a few years. Her debut book Night School will be published in January. To find out more about the book, see below. 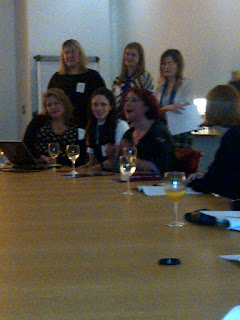 We also got to listen to Sara Manning! Yes, you read that right. Sara Manning, who is already extremely well known in the contemporary YA market, has just signed up with Atom for her next book. She told us about her forthcoming book 'Adorkable' which will be out in May and is about a young girl who has a blog and lots of followers on Twitter, She gets kind of friendly with the school hottie!

We were also shown all the other books that Atom will be publishing in the first half of 2012, which I have listed below. We then headed back into Little Brown's super swish library - I am talking book heaven! I must remember to take photos of it, if I ever get invited back.
Whilst back in Atom's library area, we all got to chat and eat more delicious cakes. The staff and authors from Atom are just super and were really lovely to talk to. The picture above, which I have borrowed from the Atom site shows C.J Daugherty and her agent, with Editorial Director Sam (who is really funny) and  the lovely Madeleine who feeds our book habit. As you can see they fully embraced the 'Back To School' theme of the evening.

Here are just a few of the fabulous bloggers that were in attendance.
Lynsey from Narratively Speaking
Sammi from I Want To Read That.
Me!
Sarah from Feeling Fictional
Leanne from District YA
Laura from Sister Spooky
Andrew from The Pewter Wolf.
Also not shown were Stacey from Pretty Books, Mark from My Favourite Books, Matt from Teen Librarian and Michelle from Fluttering Butterflies. If I have forgotten to mention anyone, I am really sorry.
Now I suppose you would like to know more about the books coming out? Yes? I am just too good to you. I will even throw in the Goodreads Summary too!
Here are books that Atom will be publishing very soon. Please don't drool over the PC though. 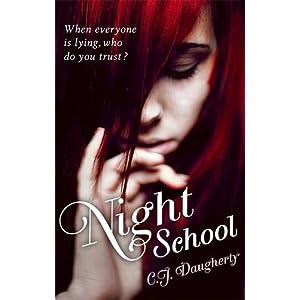 Anyone recognise the girl on the front cover? You may have seen her before on the cover of Entangled by Cat Clarke.
Described as a YA style 'Secret History', C.J Daugherty's book NIGHT SCHOOL will be published in January.
Allie Sheridan's world is falling apart. She hates her school. Her brother has run away from home. And she's just been arrested. Again. This time her parents have finally had enough. They cut her off from her friends and send her away to a boarding school for problem teenagers. But Cimmeria Academy is no ordinary school. Its rules are strangely archaic. It allows no computers or phones. Its students are an odd mixture of the gifted, the tough and the privileged. And then there's the secretive Night School, whose activities other students are forbidden even to watch. When Allie is attacked one night the incident sets off a chain of events leading to the violent death of a girl at the summer ball. As the school begins to seem like a very dangerous place, Allie must learn who she can trust. And what's really going on at Cimmeria Academy. 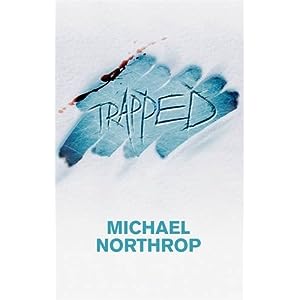 I read and reviewed this book last week and it reminded me of The Breakfast Club during freak weather! This is published next week. So make sure you buy it!
The day the blizzard started, no one knew that it was going to keep snowing for a week. That for those in its path, it would become not just a matter of keeping warm, but of staying alive....
Scotty and his friends Pete and Jason are among the last seven kids at their high school waiting to get picked up that day, and they soon realize that no one is coming for them. Still, it doesn't seem so bad to spend the night at school, especially when distractingly hot Krista and Julie are sleeping just down the hall. But then the power goes out, then the heat. The pipes freeze, and the roof shudders. As the days add up, the snow piles higher, and the empty halls grow colder and darker, the mounting pressure forces a devastating decision.... 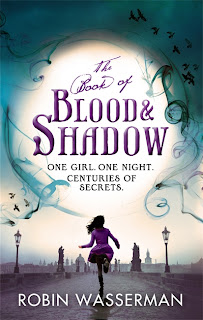 Isn't this cover gorgeous? I do love the covers that Atom produce, they really do stand out. This has been described as 'Die For Me' meets
It was like a nightmare, but there was no waking up.  When the night began, Nora had two best friends and an embarrassingly storybook one true love.  When it ended, she had nothing but blood on her hands and an echoing scream that stopped only when the tranquilisers pierced her veins and left her in the merciful dark.
But the next morning, it was all still true: Chris was dead.  His girlfriend Adriane, Nora's best friend, was catatonic. And Max, Nora's sweet, smart, soft-spoken Prince Charming, was gone. He was also—according to the police, according to her parents, according to everyone—a murderer.
Dei controls the world. Unbeknownst to her, Nora now holds the crucial key to unlocking its secrets. Her night of blood is just one piece in a puzzle that spans continents and centuries. Solving it may be the only way she can save her own life.
'The Davinci Code'. I can't wait to read this one which comes out in January. I do like a good thriller. 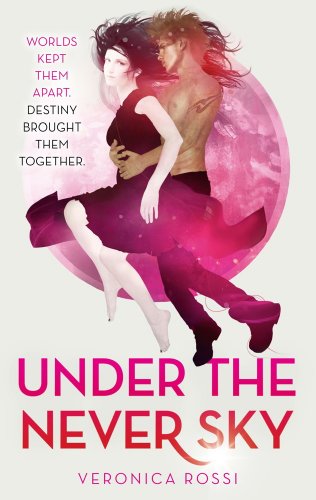 This book has been described as a post apocalyptic  Romeo and Juliet and had everyone very excited! It will be published in February.
WORLDS KEPT THEM APART.DESTINY BROUGHT THEM TOGETHER.Aria has lived her whole life in the protected dome of Reverie. Her entire world confined to its spaces, she's never thought to dream of what lies beyond its doors. So when her mother goes missing, Aria knows her chances of surviving in the outer wasteland long enough to find her are slim. Then Aria meets an outsider named Perry. He's searching for someone too. He's also wild – a savage – but might be her best hope at staying alive.If they can survive, they are each other's best hope for finding answers.

This has been described as the 'Black Swan for the teen set'. Personally I haven't read many books that deal with any style of dancing, but I have a feeling they might be about to explode into the YA market.
As a dancer with the ultra-prestigious Manhattan Ballet Company, nineteen-year-old Hannah Ward juggles intense rehearsals, dazzling performances and complicated backstage relationships. Up until now, Hannah has happily devoted her entire life to ballet. But when she meets a handsome musician named Jacob, Hannah's universe begins to change, and she must decide if she wants to compete against the other "bunheads" in the company for a star soloist spot or strike out on her own in the real world. Does she dare give up the gilded confines of the ballet for the freedoms of everyday life? 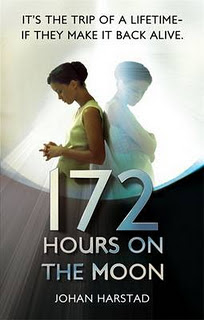 This book is supposed to be super scary! It was first published in Norway about three years ago and is a science fiction book based on the moon! It will be out in April next year.
Three teenagers are going on the trip of a lifetime. Only one is coming back. It's been more than forty years since NASA sent the first men to the moon, and to grab some much-needed funding and attention, they decide to launch an historic international lottery in which three lucky teenagers can win a week-long trip to moon base DARLAH 2-a place that no one but top government officials even knew existed until now. The three winners, Antoine, Midori, and Mia, come from all over the world. But just before the scheduled launch, the teenagers each experience strange, inexplicable events. Little do they know that there was a reason NASA never sent anyone back there until now-a sinister reason. But the countdown has already begun. . .
Now Atom have decided to branch out and will be publishing books for the 8 to 12 year old market starting in March. They had received so many letters and emails from parents who had younger siblings who wanted to read the Twilight books that they felt it would be an excellent idea to produce similar style books for that age range.
So here are a few books they will be publishing for the 8 to 12 year old market. 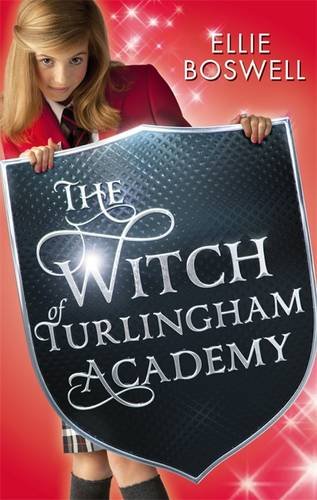 What better for the 8 to 12 year olds, but a good boarding school book with a little of the paranormal added. This has been described as 'The Worst Witch meets The Chocolate Box Girls' and will be the first book on offer to the tween market in March.
It's not easy being the only day girl at Turlingham boarding school: Sophie misses out on all the midnight feasts and late night gossip. Things take a turn for the worse when a new girl - Katy - shows up and all Sophie hears is Katy, Katy, Katy from her friends. It's like she's put a spell on everyone. Katy's no witch, but there is a witch at Turlingham. Katy comes from a long line of witch hunters whose fate is to stop evil magic once and for all. Sophie is going to help her - anything to get Katy out of her life and get things back to normal. But what she finds out means nothing will ever be normal again! 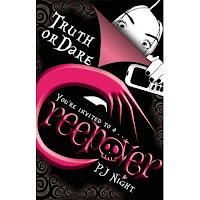 This series is being labelled 'the Goosebumps for girls and the first book'Truth or Dare' will be published in April.
During a round of Truth or Dare, Abby Miller confesses her crush on Jake Chilson. The only people who know her secret are her friends at the sleepover and whoever sent her a text message in the middle of the night warning her to stay away from Jake or else! But Abby isn't going to stay away from Jake, especially not after he asks her to the school dance. As the night of the dance comes closer, some very creepy things start happening to Abby. Someone definitely wants to keep her away from Jake. Is it a jealous classmate or, as Abby begins to suspect, could it be a ghost?
The Goddess Girls series.
Atom have also bought the rights to the Goddess Girls series which tells us about the famous goddesses whilst they were at school before they were famous. The four books in the series are:
Athena The Brain
Persephone The Phony
Aphrodite The Beauty
Artemis The Brave.
The first one is published in May.
As you can see it looks like it will be an exciting year for Atom in 2012. Thank you everyone at Atom for inviting me and allowing me to drool all over your books.
at December 07, 2011