The Big Break with Ruth Warburton

On the blog today, I have the fabulous debut author Ruth Warburton who has me drooling for the second book in her series. You may remember me screaming with delight over A Witch in Winter last week, but if not, please click here to read the review. 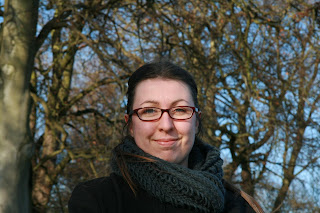 What did you do for a living before writing became your chosen career?
I actually still have the day job – I work in the publicity department of an adult publisher. I have no plans to change that – I only worked part-time anyway, because I have kids, so it fits in well with writing.

Your debut novel, ‘A Witch In Winter’ has just hit the bookshops, how are you feeling about it right now?
Kind of scared and kind of thrilled! Mostly thrilled. But it's very weird realising that my book is out there now for anyone to read. I feel incredibly lucky – I'm fairly sure I'll wake up any moment.

I just love the sound of Wicker House, where did you get the inspiration for it from?
It's a little bit like my cousin's house. Her house is very old – Tudor, I think – and it was in a really bad state when they bought it. It had been kind of hacked around and generally neglected, and it felt a bit sad and draughty. They've restored it and now it's full of polished dark wood, warm stone and big sofas and is absolutely gorgeous. Wicker House starts off more unlivable than their house ever was, but I wanted it to have the same feeling of somewhere ancient and tired, that could still shine – if only given the chance.

Winter sounds like a town I would love, is it based on a real place?
It's a little bit like lots of places I've stayed on holidays – Cornish and Breton fishing villages, parts of Devon and the South coast. But it's also influenced by my home town of Lewes, where I grew up. Lewes isn't exactly like Winter – it's not a fishing village for one thing, it's about five or six miles inland. But it's very old, with a ruined castle that glowers above the town, a bit like Winter Castle. And it has the same mix of chocolate-box prettiness with a tough, sometimes anarchic interior.
,
Did you have to do a lot of research into witchcraft to write the book? If you did, what was the most interesting thing you found out about witchcraft?
I had a fantastic time researching witchcraft legend and spells – there wasn't room for most of it sadly! Lots of snippets of real spells and superstitions did find their way into the book – the broom across the door is a real superstition, and the blood in the wine spell is based on an old voodoo charm to keep a man, although in voodoo tradition you put the blood in his coffee.
For book two my research has shifted towards more counter-witchcraft stuff, and I've ended up reading some very old witch-hunting manuals, which are incredibly scary and make you thoroughly glad to live in a time when being different is, if not completely accepted, at least not likely to get you burnt at the stake. The research was fascinating, but I wouldn't recommend them for night time reading.

How long did it take you to write ‘A Witch In Winter’?
The first draft took about three months, and was written while I was on maternity leave. Then I fiddled with it and edited it over the course of about a year, changing things here and there.

I know you have two sequels planned. Can you let us into any secrets about them?
Book two is called A Witch in Love. It starts just before Christmas, about six months after A Witch in Winter finishes. Anna is going to find out a lot more about her past – and she's going to discover that there are worse things than witches out there. We'll be seeing a lot more of Emmaline, Bran and Abe. And above all, Anna and Seth's relationship will be tested to the limit.
Book three is called A Witch Alone and I can't really tell you too much about it without giving some major spoilers! But it's when all the threads come together and Anna's faced with some impossible, terrible truths and choices.

Was ‘A Witch In Winter’ your first finished manuscript, or are there others hidden away?
No, I have dozens under the bed! I've always written fairly compulsively, and was writing book-length screeds from my teens onwards. But A Witch in Winter was the first one I really tried to do anything with. The early ones were pretty rubbish, and then later on I was writing adult stuff, and because I work in adult publishing I thought it would be too awkward to send it out to people I knew or might have to work with. I couldn't bear the idea of getting rejected by an agent and then having to sit opposite them in a meeting the next day! I know – horribly cowardly.
It was only when I wrote A Witch in Winter and it somehow came out as YA, I realised that it was a completely different set of agents – ones I'd never met, and would probably never meet again in the course of work.

How many times did you have to edit your book before the agent was happy to send it off to publishers?
Not very much actually – I think that year of tinkering paid off, because she gave me back some notes on my manuscript and suggested a couple of scene changes, but that was it. The whole process was very painless compared to some of the rewrite stories I've heard.


What was your first reaction when you found out that your book was to be published?
Complete disbelief. Even when I had an agent, I still didn't really think it would happen. I know how high the bar is, and how many fantastic writers get rejected day in, day out. It's still really hard for me to take in!

How long has it taken for your book to reach publication after the initial agreement?
In the end, just over a year – which is fairly quick in publishing terms.

What was happening to your manuscript during this time?
First of all in November I met my editor, and we had a conversation where she told me what she thought needed doing. Then in January she sent me an editorial letter outlining the broad structural changes, and a manuscript marked up with more detailed comments. I went away to work on her suggestions and about a month later I came back with a second version of the book. Then we did more fine tuning (mainly line-editing by this point). Then she read that version, and after a little bit more to-ing and fro-ing we were both happy we'd made all the changes we needed to. Finally, around April/May, it got signed off to go to the copy editor, who checked the spelling and changed all my commas to semi-colons and all my semi-colons to commas.
I had to go through the copy edits and check I was happy with those – and it was signed off to be typeset. Then I had to check the typesetter's galleys – and eventually all the mistakes were ironed out (I hope!) and it was sent off to the printers.

How have you kept yourself occupied as you waited whilst waiting for publication day?
With two small children, two sequels to write, and a day job, that hasn't really been a problem!

What other projects are you working on at the moment?
At the moment I'm kind of immersed in book three and can't really see beyond that. But I'm beginning to get the glimmerings of another idea beyond the horizon – I can't say too much about that in case I jinx it!

Tell us what a typical writing day would be like?
I only have two days a week to write, and they are short days as they're topped and tailed by the school/nursery run. So basically I put my head down at 9.30am and don't look up from my laptop until 2.30pm. I try to ignore the housework (usually successfully) and the internet (usually unsuccessfully). Otherwise it's snatched half hour slots in the evening and at weekends.


What advice would you give to aspiring and unpublished authors?
I'd say the first thing is read. Everything. Classics. Contemporary. Genre. Literary. Get a feel for what makes a good story, what grips you, what turns you off. Then try to forget it all and tell your own story. (Easier said than done, I know).
I think it can also be immensely helpful to join a critique group, or find a peer review website, and read some of the manuscripts. Oddly, not so much for the advice you get on your own work (although that can be immensely helpful) but more because there's nothing like assessing other people's work to make you sharper eyed about your own faults.
And maybe most importantly, enjoy it. Not the subbing and the rejection – you'd have to be a masochist to enjoy that. But the writing – enjoy the writing. Short of magic, it's still the best way I know to inhabit another world for a while.

Thanks Ruth for joining us today. You know I can't wait to read A Witch In Love!


To find out more about Ruth Warburton: