I haven't done one of these for ages, but I am seeing some lovely covers lately that are causing some serious book drooling.

The Unnaturalists by Tiffany Trent  - to be published in August 2012 by Simon and Schuster.
I saw this one over at My Favourite Books where Liz had me drooling.
Goodreads Summary
Vespa Nyx wants nothing more than to spend the rest of her life cataloging Unnatural creatures in her father’s museum, but as she gets older, the requirement to become a lady and find a husband is looming large. Syrus Reed’s Tinker family has always served and revered the Unnaturals from afar, but when his family is captured to be refinery slaves, he finds that his fate may be bound up with Vespa’s—and with the Unnaturals. As the danger grows, Vespa and Syrus find themselves in a tightening web of deception and intrigue. At stake may be the fate of New London—and the world.

Bliss by Kathryn Littlewood - to be published in March 2012 by HarperCollins Children's Books. I actually managed to pick this one up via ReaditSwapit and just fell in love with the cover.


Goodreads Summary
“It was the summer Rosemary Bliss turned ten that she saw her mother fold a lightning bolt into a bowl of batter and learned – beyond the shadow of a doubt – that her parents made magic in the Bliss Bakery.” – A delicious new novel for girls, the first in a trilogy. The Bliss family cook book is a closely guarded secret. Centuries old and filled with magical recipes, it has been used for years to keep things running smoothly in the town of Calamity Falls. But when eleven-year-old Rose Bliss and her three siblings are left in charge of the family bakery, one magical mishap follows another until the town is in utter chaos!

Frostfire by Zoe Marriott - to be published in July 2012 by Walker Books
I just love the covers they give Zoe's books and they are always such a treat to read.
Goodreads Summary
Frost is cursed - possessed by a wolf demon that brings death everywhere she goes. Desperate to find a cure, she flees her home, only to be captured by the Ruan Hill Guard. Trapped until she can prove she is not an enemy, Frost grows increasingly close to the Guard’s charismatic leader Luca and his second in command, the tortured Arian. Torn between two very different men, Frost fears that she may not be able to protect either of them ... from herself. 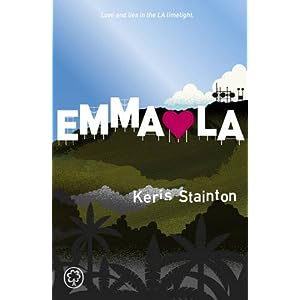 Emma Hearts LA by Keris Stainton. To be published by Orchard Books in June.
Who needs the Hollywood sign when they can have this?
Goodreads Summary
Emma’s just arrived in Los Angeles, a million miles away from all her friends, and any chance of a boyfriend.
Unless you count dull old Oscar – which she doesn’t. Not at first, anyways.


Teen heartthrob Alex might have potential too. If she can get him away from the prying eyes of the paparazzi, that is.

Two boys, unlimited sunshine, and a new life among the stars. Maybe LA’s not that bad, after all

Dreams - The Sarah Midnight Trilogy by Daniela Sacerdoti - to be published  in May by B and W Publishing.  I read Dani's first book 'Watch Over Me' last month and loved it so much I put it in my Top 5 reads for January. So I can't wait for this one. The cover is simply delicious!
Goodreads Summary
You'd never think it could happen to you. You'd never think that one day you'll stand in a graveyard, rain tapping on a sea of black umbrellas, watching your parents being lowered into the earth, never to come back. It's happening to me. They said it was an accident. Only I know the truth. My parents were hunters, like their parents and grandparents before them, hundreds of years back, scores of ancestors behind me, fulfilling the same call. I must follow in their footsteps. I am the only one left to keep the promise. I can never give up the fight, this fight that has been handed down to me, thrust upon my unwilling shoulders. I'd rather be buried with my parents, my brave, fierce father and mother, who lived and died by the Midnight motto: Don't Let Them Roam." Ever since her thirteenth birthday, seventeen-year-old Sarah Midnight's dreams have been plagued by demons - but unlike most people's nightmares, Sarah's come true. Her dreams guide her parents' hunt as Sarah remains in bed, terrified but safe, sheltered from the true horrors of the Midnight legacy. But all this is about to change. After the murder of her parents, she is cruelly thrust into a secret world of unimaginable danger as she is forced to take up their mission. Alone and unprepared for the fight that lies before her, Sarah must learn how to use the powers she's inherited and decide whom to trust before it's too late...

Some gorgeous books coming out soon!
at February 11, 2012