I am really pleased to welcome Michelle Lovric to the blog today to talk about Talina In The Tower. Pop back later for my review. 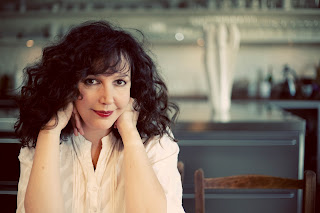 Regrets, I’ve had a few – Michelle Lovric
This is a blog about a Dead Darling. We’ve all got them, buried under the floorboards of our mind, physically tucked away in earlier drafts. All writers are serial killers, annihilating extraneous siblings, destroying innocent bystanders, culling characters that clot up our plots.

So … killing my darlings: I accept it’s got to be done. Especially by me. I write long novels – telephone directories of fiction. If you threw one of my books at someone, they’d be unlikely to survive. That’s not the only problem. Not everyone likes a meaty tome, especially if they are flying Ryanair. Plus, the foreign rights for long books are the devil to sell.

When I think back on the characters I’ve killed off in my novels, there was always a very good reason for dispatching them, usually to do with the relentless drive for pace and relevance. This is particularly the case in children’s books, where, within a limit of around 80,000 words, there is just so much to do, and too many children to do it to ( ‘You Can't Have Your Kate And Edith Too’).

But I’ve not able to quite let go of all those characters who never quite made it to the printed page and the press release. They lurk in files discreetly labelled ‘Talina in the Tower offcuts’ or ‘Eggbits’ (from the days when my adult novel The Floating Book was known as The Mundane Egg.)

Talina in the Tower, my latest book for children, had one major casualty. I did not so much as murmur when my wise editor stated the obvious: that poor little Blind Boy Cocum was extraneous, incongruous and not moving the story along. Off he went to ‘Offcuts’, never to be seen again.

Except for now. Here is his genesis, his progress, his decline and fall. I present it as a penitential exercise, to show how misconceived was his whole existence. Fellow writers may regard this is as a cautionary tale: DON’T DO THIS AT HOME.

Blind Boy Cocum was in fact conjured from a non-fiction book I wanted to do called Broke-heart Fountain, inspired by the most wallowing lyrics of Blues and Country music. Brokeheart Fountain was subtitled ‘The Most Miserable Country & Blues Songs - the most tragic outspillings and lovelorn tributes ever sung (or moaned)’. Song titles were the likes of ‘I've Got The Hungries For Your Love And I'm Waiting In Your Welfare Line’, ‘Get Your Tongue Outta My Mouth 'Cause I'm Kissing You Goodbye’, ‘Am I Double Parked by the Curbstone of Your Heart?’,‘If I Can't Be Number One In Your Life, Then Number Two On You’. … and lots of songs about the heart: ‘ She Made
Toothpicks Out Of The Timber Of My Heart’, ‘Velcro Arms, Teflon Heart’, ‘You Done Tore Out My Heart And Stomped That Sucker Flat.’

I imagined my ‘Blind Boy Cocum’ as a young version of the American singer ‘Blind Boy Fuller’. Born Fulton Allen in 1907, ‘Blind Boy Fuller’ was a ‘Blues’ guitarist. This melodic, plaintive music (often with an edge of sharp ironic humour) had deep roots in the southern American countryside. The Blues became popular all over the States in the early part of the 20th century, thanks to musicians like Blind Boy Fuller. Other blind musicians of that time were Blind Lemon Jefferson, Blind Willie McTell and Blind Mississippi Morris.

Of course, the ‘Blues’ did not exist as a named genre in 1867, when Talina in the Tower is set. But I justified including this kind of music because historians trace elements of the Blues all the way back to the work songs and laments sung in the era of slavery. The enslavement of peoples and animals is very much the burning issue in Talina in the Tower. Blind Boy Cocum was going to voice the laments of the dispossessed and do so with Bluesy black humour.

My heroine Talina is a girl who conducts many campaigns – for the rights of egrets, against all kinds unfairness in society. When she makes her protests, her music was provided by ‘Blind Boy Cocum’, a mysterious young man from America, who wailed out a plaintive melody – each note twitching like a muscle – accompanying himself on a strange instrument fashioned out of bent wood and a single string. Some said he was an escaped slave – and certainly he sang with all the accumulated longing of a sad past.

When Talina accidentally turns herself into a cat and ends up in a smelly cattery, Blind Boy Cocum offers to compose and sing a song to raise money for the strays: ‘The Tom Cat Blu-u-u-es’ (a title borrowed directly from Blind Boy Fuller’s repertoire, though my words were different).
‘Folk a-here aint got a lick o sense.
Tink they pusscats aint worth two cents
‘They bad massas think they cats good for nuthin’ but kill rats.
But a pusscat he good for more, much more ’n tha-a-a-t …’


And when Talina arrives at the Island of the Ravageurs, the hyena-like villains of the story, and escapes into their kitchen, who does she find there among the human and feline slaves but Blind Boy Cocum himself wailing, ‘I got they slavey Potato-Peelin’, Fat-Trimmin’, Chicken-Guttin’, Bean-Trimmin’, Maybe-they’s-about-to-eat-me Blu-u-es.’


Talina frees the Ravageurs feline and human captives and sets them swimming back to Venice, she asks Blind Boy for a song to keep their spirits up. He doesn’t respond quite as she’d hoped:
‘I got they Smokey Scratchy Soggy-Bottom Blu-u-es…’ crooned Blind Boy,
‘I got they sharks on ma left,
I got they bitey catfish on ma right,
I got mahself in a spot dat’s tight, tight, tight.
I got da womens and da childrens.
Folks is gonna be a- drowning’ left and right …’

I’m sure you’ll agree that, as a character, Blind Boy Cocum maybe deserved five little minutes on a blog but not immortal life in a published novel.

I wonder how many of you have such characters congregating in the remote reaches of your hard disc?

Talina in the Tower is published on February 2nd, 2012, by Orion Children’s Books Michelle Lovric blogs on the History Girls website and An Awfully Big Blog Adventure website.

To find out more about Michelle Lovric, check out her website: http://www.michellelovric.com/
at February 23, 2012

Email ThisBlogThis!Share to TwitterShare to FacebookShare to Pinterest
Labels: Blues, Michelle Lovric, Talina in the Tower, The Floating Book, Venice