Guest Post - Monique Gives Us Her Unique View of Alaska


Many of you may already follow Monique on Twitter, but if you don't you are really missing out. She is one of the funniest people I have ever had to pleasure to talk to. You can find her on Twitter as @Neeky78 as well as on her blog Monique Will Know.  I asked her with fluttering eyelashes and promises of Cadbury's chocolate if she would do a post for me about her time in Alaska. This is the hilarious post she created.

Vivienne from Serendipity Reviews asks:
Hi MoniqueWillKnow,
Do you know any bloggers in Alaska that could do a guest post for me about the state?


Hi Vivienne!
At the risk of being accused of false advertising, I’m afraid I DON’T know any Alaskan bloggers, sorry. When I was there many years ago, dial-up Internet was the pinnacle of technology and the one (long) email I wrote in Alaska was lost when there was a power surge as this was pre-auto-save-draft days. I have a grand total of one notebook page of random words like “puffins big deal” and “good view, mountains, * lesbian B’n’B” and a couple of blurry photos of ice. Or it could be clouds. If Lonely Planet come calling for my Alaskan memoirs, I’ll be sure to let them know you have first dibs.

Ok MoniqueWillKnow, I have trawled the Internet, scaled the globe and exhausted every avenue, so all I’m left with is you. Can you please write me a post about Alaska?
Can I? Debatable.
Will I? Hell, yeah!
I don’t even care that I’m being picked from the very bottom of the barrel. I’m in the barrel, that’s all that matters. Speaking of barrels, I also have sporadic memories of The Whiskey Trail in Scotland scribbled on the back of a pub coaster that you’re more than welcome to.

Well I don’t want to be greedy, so I’ll leave that for Lonely Planet. But, er, thanks.
Vivienne, would you mind if we did this blog post as an interview? I’ve never been interviewed before! I’ll provide biscuits. The good sort too, not the crappy, broken ones rejected at the bottom of the biscuit barrel. No one wants what’s left at the bottom of the barrel, do they?

Well, sometimes they don’t have a choice…
You can dip the biscuit in your tea. I won’t tell anyone.

I’m a bit busy actually, so I don’t think I’ll be able to interview you sorry.
Can I interview myself?

If anyone could Monique, it’s you.
Aw, thanks! Here we go…


Q1. What inspired you to visit Alaska, Monique?
Baywatch.
No, seriously. At the end of Season Eight in the understatedly titled episodes White Thunder at Glacier Bay, Part 1 and White Thunder at Glacier Bay, Part 2, the cast find themselves wearing their red swim suits and solving crimes on a cruise through Alaska, and Mitch and the girl with the blonde hair (you know the one) realise they’re in love. Watch: White Thunder at Glacier Bay trailer.
I caught those episodes one day in a re-run and I too fell in love. Beautiful, brilliant blue, ice cliffs of glaciers. Something about that ice had me plotting there and then to go and see it for real. Physically, I was on the couch in my pyjamas eating cereal at two o’clock in the afternoon when I should have been in a lecture, but in my mind I was in Alaska, on a boat, watching the ice cracking and falling like chunks of frozen sky. Possibly with lifeguard Cody who would hold me close to keep me warm, but be fortuitously immune to the cold himself and would therefore not be wearing a shirt.
I wanted to go to Alaska. I NEEDED to go to Alaska.
In later, wiser years, I would come to realise that New Zealand also has glaciers only a three hour flight from Sydney, so my dream could have been achieved in a weekend. Live and learn.

Q2. So when did you go?
It was June 2001 when I waved my parents and little brother good bye at Sydney airport, hitched my backpack onto my shoulder and set off by myself for the adventure of a life time. The Last Frontier was going to be my First Frontier! Alaska, followed by Canada and finishing in London where I was planning on rounding a corner in Notting Hill and getting orange juice spilt on me by Hugh Grant.

Q3. Good plan. What were your plans for Alaska?
Firstly, no cruise ship. It was OK for Mitch and the gang on Baywatch, but I wanted to be in control of where I went and how long I stayed, which cancelled out doing a tour too. Also, going on a cruise by yourself is slightly sad for a 22 year old. So I did a rough itinerary myself instead. I figured I’d start with Anchorage, the largest city in the state and the northern most city of the USA, and also see Juneau, the capital city, located in the southern panhandle part of Alaska.

Anchorage. Photo c/o Wonderlane, San Mateo, USA.
Then, of course, I organised to see the famous Inside Passage – the setting for those two unforgettable Baywatch episodes. The fjords and sounds of this famous stretch would wind me through the island straits, satisfying my pretty-blue-ice obsession and landing me in Glacier Bay National Park and the town of Gustavus (population - 400).

Inside Passage. Photo c/o Pat W.Sanders
From there a small ferry would get me (safely) up close and (appropriately) personal with humpback whales (they splash a lot), brown coastal bears (you can recognise them by their brown coats), puffins (they don’t just exist on children’s book spines), orca (killer whales that aren’t whales, they’re dolphins), steller sea lions (endangered) and moose (Bullwinkle!). 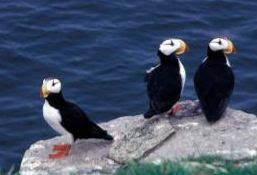 Puffins. Photo c/o U.S. Fish and Wildlife Service
It was an adventurous plan, it was a somewhat unique plan but it was a poorly thought out plan that inexplicably turned out OK. Alaska is a BIG state, even to an Australian, and in hindsight I hopped around a bit too much and would have benefited more from sticking to one section, rather than trying to leave my footprints along the entire 10 000+ kilometres of coastline. Live and Learn.

Q4. You must have spent a lot of time there to be named an Alaskan Expert?
Er, no. I was a tourist. For three weeks. I wore a camera around my neck, sent postcards home, and bought shot glasses with the state flag on them, all while wearing flat, ugly, but sensible, shoes. I’m not an Alaskan expert or an honorary Inuit, I just loved the place and have some great, quirky memories that have stuck with me. My one regret is that I didn’t go with anyone else. All the funny little things I remember can’t be shared with anyone. It was a series of “you had to be there” moments.

Q5. So that’s it? That’s all you can tell us about Alaska?
Pretty much. You can find a million websites or travel guides with mile-long lists of must-see sights and must-do activities for Alaska. And I’m not presumptuous enough to think that my flowery descriptions of the natural beauty of the place will be any better than the hundreds or thousands of people who have immortalised their memories in iambic pentameter before me. Truth be told, I did find some horribly, embarrassingly tragic lines of poetry in my little notebook that I wrote during my travels and, trust me, I am doing the world a favour by keeping them hidden.
All I really have are the funny little memories of random things I saw or experienced. I don’t remember the best café for brunch in Juneau or the cheapest place to book a tour in Anchorage. I don’t even have many snapshots of my time there, hence all the attribution credits for using other people’s photos.
Actually, during this self- interview I’ve come to the conclusion that memoir writing is not going to be my forte. I’m a bit crap at the whole remembering thing and my record keeping can at best be described as barely-existent.

Q6. Can you at least share some of the funny little memories with us?
Yeah, OK. If you insist.

Come back later to find out the six things that stuck with Monique after her trip to Alaska.
at February 14, 2012