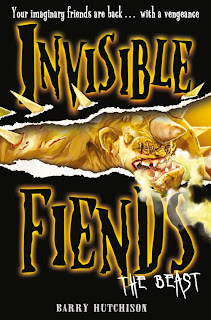 Pages: 300
Published by HarperCollins in January 2012

I woke up screaming. This, of late, was not unusual.
The seats beneath me creaked in complaint as I sat upright and tried to shake away the memories of the nightmares before they could fully take hold . No such luck.

Goodreads Summary
There is a beast on the loose and it has killed Kyle’s head teacher. Now Kyle has to stop it — but it would help if he knew where to look. Can Kyle stop this monster from the Darkest Corners before anyone else dies? Certainly not, if the police have anything to do with it. Because they think they know who the beast is. They think it’s Kyle!
*********
Mr Hutchison does love a good massacre and this one doesn't disappoint. His descriptions of goriness always make me squirm. This is the penultimate book in the series, and just like Doc Mortis I felt it could be read alone.

This book did have one big  problem for me. The Screechers. Unfortunately it was full to brim with Barry Hutchison's version of zombies and as many of you know they just don't do anything for me. They played such a large role in the book, that I did find it difficult to keep reading. But that is just personal taste, so if you love zombies in any form then you will love this book.

I didn't feel that the book progressed the series as much as Doc Mortis had, but for me
me, the ending more than made up for this. It was explosive to the end with lots of secrets finally being revealed which I believe have been hidden since the beginning of the series.
This book is a quick intense read where the action and horror is continuous. I am intrigued how the series will end and will definitely be reading the final book.

Barry Hutchison is excellent at writing the gory stuff, so do have a look at this series. Although if you happen to be like me and want to live in a zombie free zone, then this one might not be for you.