As promised earlier, Monique is back to share the six things she remembers most about Alaska.
1. Just plane crazy.
People who live outside the cities of Alaska have to travel huge distances, often over mountains, just to get their groceries or the mail. With a lot of the cities having no road access between them, boats and planes are the most popular form of transport in the state. In the past, dog mushing was the favoured means of getting around, but now it’s just the official state sport. Which is a shame. I quite like the idea of being pulled in a sleigh by a team of dedicated Malamutes whose unwavering endurance would power us through the snow as I yelled “On Dasher, on Dancer, On Prancer, On Rover…”
Alas, planes are more convenient I’ve been told, especially in the winter months.
Now, picture your local shopping centre or supermarket car park. Now picture the cars replaced by planes. This is what I saw in Anchorage. A plane park! Some were sea planes, lined up around the edge of Lake Hood and others were light air craft, parked side by side at an aircraft strip next to the lake. Very cool. I would have LOVED to rock up to high school flying one of those with my P plates stuck on the front.
2. Murderous Mud.
Anchorage is a coastal city and the sea is very accessible from downtown. The flat, solid looking mud plains had me itching to take my shoes off and walk out to the water’s edge. It was summertime, so it wasn’t snowing or freezing cold; there was a crisp bite in the air, but the sun was warm. Maybe I’d throw a bit of driftwood for a passing Labrador to catch, or get lightly splashed by a cherubic toddler being chased down the beach. I’d laugh and shake the sparkling drops of salt water from my hair and continue my stroll, leaving a snake of **dainty foot prints as evidence I had been there.
My romantic reverie had a major obstacle though. The mud flats can eat you. It’s like quicksand and people (read: tourists) have found themselves cemented up to their chest in the fine, silt mud after walking out to the water and they haven’t escaped or been rescued by the time the tide came in to claim the flats. 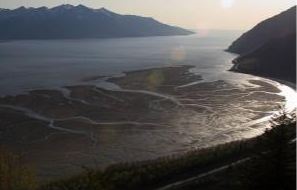 After my initial shock that something like that existed outside of The Never Ending Story, I was ridiculously impressed. I thought Australia did a pretty good job of scaring tourists with warnings of deadly spiders, poisonous snakes and cancer causing sun rays, but unfenced quicksand trumps all of those.
3. My hood is a glacier, yo.
A mere 20km from the city centre of Juneau is the hulking mass of Mendenhall Glacier. Any time they like, ***Juneaueans (I think I made that word up) can go for a drive, park their car and hike up to the glacier. Not near the glacier, but right up to it. To touch it, hear it, lick it. Whatever they want. While I didn’t get a chance to do the hike, I did hang out at the viewing points that are close to the glacier and enjoyed my afternoon snack listening to it calving (fancy word for chunks of ice falling off).
What sticks with me though, is there was a group of teenage boys hanging out there too. They were chatting and having a smoke and from my eavesdropping, I could tell they were local kids just wiling away their weekend, hoping to catch the eye of any visiting girls. It could have been teens in Sydney, hanging out the front of The Towers shopping centre near my home, with nothing better to do than watch buses and taxis come and go. However, these guys got to watch one hundred year old ice break bit, by bit, into a pristine freshwater lake instead. Very cool. 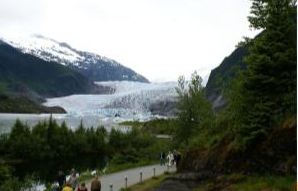 Mendenhall Glacier. Photo c/o Richard Martin
4. Clam Chowder is good.
Either in a bowl or in a cup, with a bread roll on the side or on its own. The end. 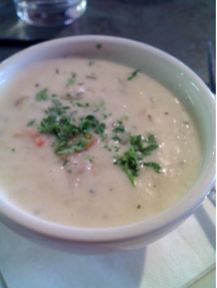 Clam Chowder. Photo c/o Ernesto Endrade
5. Residents tax the government.
Well, kinda. There’s no personal income tax (woo hoo!) and forty odd years ago a very nice Alaskan politician organised an investment fund that received a percentage of the profits made from the sale of state oil and minerals. Every year, each resident (including children) gets a dividend payment from this fund (unless they’ve been naughty and convicted of a crime that year) that can be up to $3000! This creates an annual sale period where retailers try to get Alaskans to spent their PFD (Permanent Fund Dividend) dollars in their shop. What fun!
6. The language of ice is cool.
Meandering quietly on a small boat through the narrow channels of Glacier Bay, I marvelled at the crystal clear water and the untouched forests climbing the mountains either side of the water. It felt like we, the handful of people on the boat, were the first ones to be there. I guess that’s the sensation everyone aims for when they travel to somewhere like Alaska. Like pioneers.
So it really spoilt my serenity when I saw the first plastic bag partly ballooned in the waters. Bloody tourists, I thought. I mean other tourists, not us. We’re pioneers. Tsk.
The second and third plastic bags really got me cranky. Who were these imbeciles? Who travelled this far into the wilderness to toss plastic bags into the water? Didn’t they have pockets? Double tsk and a condemning head toss.
It soon occurred to me that all the bags were white and their numbers were growing. Upon closer inspection I realised with a jolt of “derr”, that they weren’t plastic bags bobbing in the water, but little icebergs!
I was informed that these smaller bits of floating ice are called growlers and had come from the calving glacier ahead. The next size category (up to 5m x 15m) for chunks of ice are bergie bits (actual, scientific name!) and then you just have the boringly named small, medium, large and very large icebergs. 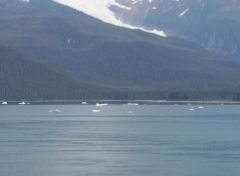 Growlers. Photo c/o Wknight94
We pushed our way through the water that was littered with growlers and bergie bits and into the John Hopkins Inlet. The ferry captain had obviously seen the movie Titanic and wisely wove between the icebergs as they grew in size. 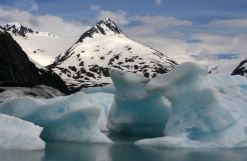 Icebergs. Photo c/o Frank Kovalchek
Yes, I did stand at the bow of the boat and considered holding my arms out like Kate Winslet, but they were bundled in several layers of clothing and my gloved hands refused to leave the warmth of my jacket pockets.
The cliff face of the glacier, known as the snout, was spectacular and just a little bit frightening. It groaned and creaked and every now and then cracks like gunshot would make us all jump and a panel of ice would calve into the water, causing a swell to rock the boat. The glacier had sections of the brilliant blue I had dreamt of many years before, and areas of dense white, but it had so much more in it than I expected. As a glacier flows down a mountain, it collects everything in its path – rocks, trees, soil, lost tourists. These get crushed and trapped in the ice and become dark, gritty layers in the glacier so the snout shows a cross section of debris collected over the miles. 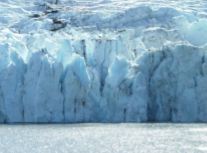 Well, that’s it.
There’s so much to see and experience in Alaska and I’d love to go back again someday with my family to show them my favourite sights and tick off a few new ones on the long to-do list the state boasts.
Whether you go by cruise ship, light aircraft, helicopter, dog-powered sled, drive the roads, ferry the fjords or join a conga line of university students camping their way through the National Parks, SEE ALASKA!
Be it your First, Last or somewhere-in-between Frontier, it must be on your list. Mitch and the Baywatch gang are waiting for you…


* The B’n’B I stayed in for a few days wasn’t specifically FOR lesbians, it was run by lesbians and was for women and children only. There was one other lady staying there who was on business from another Alaskan city and she always stayed at the B’n’B because her kids could come visit her on the weekend if she was on a long trip. The lovely couple running the house were so accommodating and made my stay so wonderful. They also had the best views from their windows, straight out to the snow-tipped mountains cradling the town. Unfortunately I have completely forgotten their names or the name of the B’n’B, so I can’t even link to a website or anything. I really am rubbish at memoirs, sorry.
** I do not have dainty feet.
*** Anyone can hike to Mendenhall Glacier, but Juneaueans have it on their doorstep to do whenever it takes their fancy. Tres cool.