Setting The Scene with Rosy Thornton

Not long after I first started blogging, I read a book called Crossed Wires by a wonderfully entertaining UK author called Rosy Thornton. It was one of the most memorable books I have ever read and still three years on one scene still sits in my mind and I can almost quote it word for word. With that in mind, I was over the moon when Rosy asked me if I would be interested in reading her new book Ninepins. I told Rosy I would happy to, before asking her if she would like to appear on the blog. She quickly whipped up this fabulous post for me. So I will pass you over to Rosy Thornton. 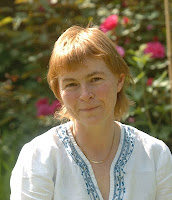 The place where I live shouldn’t really exist. Or rather, it shouldn’t exist as habitable land, because it ought by rights to be under water!
I live in Cottenham, a village in the Cambridgeshire fens: a swathe of country stretching north from Cambridge towards King’s Lynn and the Wash. Until a few short centuries ago, the whole area was marsh and wetland, useless for agriculture and much of it impassable except by boat. 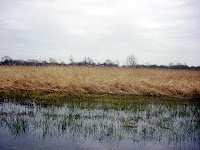 Then, in Cromwell’s time, with the help of engineers recruited from the Netherlands where they understood these things, the land was drained, the water pumped out from the earth into a series of ditches and cuts (known locally as ‘lodes’) which still criss-cross the fields. From a boggy, barren waste good only for fishing, the land was transformed into acre upon acre of rich, black soil, ideal for arable farming.
It remains on first acquaintance a strange, unwelcoming place – flat and featureless and bleak. The Great Level, they call it: nearly fifteen hundred square miles of flatland of which my own corner is just a tiny part.
This landscape was not one I would particularly have chosen to inhabit. In fact, when my partner and I moved out from the beautiful old city of Cambridge sixteen years ago in search of village life, we agreed that we would come anywhere but here. Both of us hailed from parts of the world where there were woods and trees, and valleys and rolling hills; we thought we’d find the fens depressing. And then I think we must have taken our eye off the ball for a moment: forgotten where Cottenham was, perhaps, or mixed it up with another village. Because the next thing we knew we had looked at the details of a house and fallen in love with it – and found ourselves to be fen dwellers.

Chosen or not, I quickly found that the landscape took hold of me and of my imagination. Much like the water which percolates constantly beneath the surface of the soil in these parts, it soaked its way under my skin and seeped into my blood. Unrelieved by contours as it may be, this is a landscape with a drama which is quite unique. These waterlands lie so low that the outlook is always dominated by the skies – huge, towering, toppling skies – so that the mood can shift with every change of season, of weather or of light.
Setting has always been important to me as a writer, and when I decided to set a novel here in the Cambridgeshire fens, I knew that landscape would play as important a part in the book as characters or story. More than that, I knew that one theme of the book would be volatility: the unpredictable, shifting sands of family relationships.
The novel which resulted – ‘Ninepins’ – is set in an old tollhouse, built on a bank above a drainage lode, and named Ninepins after a corruption of the ninepence toll once payable to cross the water there. It lies on the outskirts of the village of Elswell, which I based very loosely upon Cottenham, but moved (as novelists will do) rather further away from Cambridge and out into the remoter reaches of the fens. There at Ninepins live single mother Laura and her twelve-year-old daughter, Beth, in the carefully controlled cocoon that Laura has built around them. But Beth is brutally asthmatic, lonely at school and increasingly distant from her mother. And into their lives like a brisk fen breeze comes Willow, a seventeen-year-old care leaver with a
mysterious past, together with her social worker, Vince. Laura must decide: what does she want of Vince, and he of her? Is Willow dangerous or vulnerable, or maybe a little of both? And are all Laura’s painstakingly constructed certainties about to come tumbling down like ninepins? 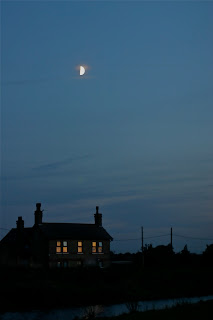 The quicksilver moods both of Beth and of the mysterious teenager, Willow, are the treacherous ground which Laura must negotiate, and their alterations are reflected through similar mood changes in the novel’s fenland backdrop.
At times, all is peace and unbroken sunshine.

“…this year the succeeding days were first clear and cool, then clear and warm and finally clear and hot, as temperatures by the middle of May soared to an unseasonably early high. The vast, open skies stretched in unbroken blue from dawn until dark, shifting through palest aquamarine to rich cobalt and back to pale again with the slow arc of the sun. Every day from mid-morning a shimmer of heat hazed the fields around Ninepins, their surface never dappled by the shadow of a cloud.”
But while the fens can be serene and beautiful, they can also be a place of menace.
“…the damp was a constant factor. It hung on the breeze like smoke; it seeped under doors and soaked through clothing; it trickled invisibly underground and gathered to run in the lodes and drains and ditches, and rose as mist from the wet, black, chocolate-fudge soil. And with the rising water in the earth, as it seemed to Laura, rose also the fluid in Beth’s lungs, narrowing her airways to a needle’s width and leaving her fighting to breathe.”
Breath and breathing; fire and ice; flooding and drowning – the recurring motifs of this novel are a reflection of the elemental nature of its fenland setting. The ‘blurb’ on the back cover sums it up thus: “NINEPINS explores the idea of family, and the volatile and changing relationships between mothers and daughters, in a landscape that is beautiful but – as they all discover - perilous.” 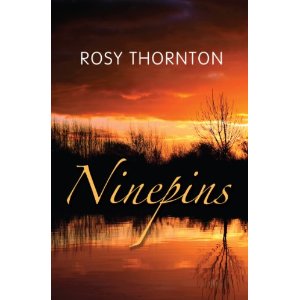 I can't wait to read Ninepins now. Ninepins was published on the 16th April by Sandstone Press Ltd.
To find out more about Rosy Thornton:
Website: http://rosythornton.com/about/about.php
Facebook: http://www.facebook.com/rosy.thornton
at April 29, 2012