The New Girl by Paige Harbison 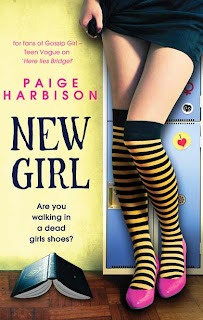 The panoramic view outside the windows of the bus showed a world that wasn't mine. It was chilly in early September and the trees were pine, not palm.
Goodreads Summary
Becca Normandy—that’s the name on everyone’s lips. The girl whose picture I see everywhere. The girl I can’t compare to. I mean, her going missing is the only reason a spot opened up for me at the academy. And everyone stares at me like it’s my fault.
Except for Max Holloway—the boy whose name shouldn’t be spoken. At least, not by me. Everyone thinks of him as Becca’s boyfriend…but she’s gone, and here I am, replacing her. I wish it were that easy. Sometimes, when I think of Max, I can imagine how Becca’s life was so much better than mine could ever be.
And maybe she’s still out there, waiting to take it back

**********
After reading the comments about the last book by this author, I was prepared to not like this book. I approached it with trepidation, especially on discovering it was a modern retelling of Rebecca by Daphne Du Maurier, which wasn't a favourite of mine either. As I began reading this it suddenly dawned on me, that I really shouldn't take other people's reviews to heart. Reading is a personal taste; where some did not love New Girl, I absolutely LOVED IT! I mean, seriously, I was gripped from the start.  I found it rather dark and extremely compelling.
I admit there is a huge amount of sleaze in the book, but it really had to be there to show the real 'Becca'. Although even I was shocked by her transition from virgin to slapper in a matter of days! Becca is clearly disturbed; her attention seeking activities would put Katie Price to shame. I couldn't warm to her at all, especially after an incident on New Year's Eve. Becca was in serious need of psychiatric counselling and came across as a  lot darker in nature than the original Rebecca.

The story is told from dual perspective. We are shown how the narrator copes with living in the shadow of Becca, as her year at Mandalay mirrors the second perspective, told in third person from Becca's point of view. I loved how you saw the way the narrator did things differently. She really didn't want to live in Becca's shadow; the more she discovered about her the more appalled she was with her behaviour. She really fought to be her own person. I didn't really warm to any of the characters, as they were all slightly damaged after colliding with Becca. Becca created a nuclear explosion of devastation in everyone's lives she touched. However, this didn't affect my enjoyment of the book in the slightest. Though saying that, I have to admit that Max was HOT!
I loved the ending. I am so pleased with the way Max handled things and how the author named the narrator at the end, showing that the future looked promising - a new chapter would begin for them.
I really loved the way this book was written; it oozed atmosphere. The descriptive passages left me tingling! I definitely enjoyed this more than the original Rebecca. It was like Gossip Girl goes to boarding school!
at May 19, 2012