The Big Break with Jane McLoughlin

I am really pleased to have Jane Mcloughlin on the blog today. Jane is the author of At Yellow Lake which was published by Frances Lincoln Children's Books on the 7th of June.

Hi Jane, thanks for joining me today on the blog.
Thanks for having me.

I would love to know a little about your writing journey. What did you do before writing books?
I’ve been writing a long time! So it’s not so much a case of what I did before, but what I’ve done as well. And that is, have children (I started writing when my kids were small), go to university as a mature student, get a teaching job, etc. When I was younger I wanted to be a performer, not a writer, although it seems a natural follow-on.

Your debut book, At Yellow Lake, is about to be published. How are you feeling right now?
A bit overwhelmed, but very happy! I had a launch in the US over the Easter holidays (as I was visiting family there, my publishers organised several events to coincide) so I’m not as nervous about the launch events as I might have been.


The book sounds rather scary, where did you get your inspiration from for it?
Although the book is a thriller, I didn’t set out to write one, believe it or not. My characters and setting came first, and the plot elements developed organically from them. An isolated cabin, three vulnerable teens, a character’s mum’s dodgy boyfriend—it all fit rather nicely.
Can you tell us a little bit about the book for my readers who have yet to set eyes on such a delight?
At Yellow Lake is a coming of age thriller about three teenagers from different backgrounds who come together at an isolated lake cabin in North America and have to overcome their conflicts and differences to stay alive. Hey—one sentence!

How long did it take you to write?
Overall, about five years. There were lots of re-writes, of course, plus lots of editing, both before and after I’d signed with Frances Lincoln.


Were there times when you felt that it would never get published? If so, how did you work your way through them?
Yes! There were so many times. At Yellow Lake’s road to publication has been full of twists and turns, and I often felt that it might not happen, or at least not happen in the book’s present form. I don’t know how I worked through it. Rejection, though inevitable, is painful and demoralising, and I don’t handle it very well. I guess I just wallowed for a few days, then picked myself off and started up again. There’s no other way around it, unfortunately, except live to write another day.

Were you given any good writing advice that you would like to share with my readers?
I was lucky enough to have been mentored by Helen Corner at Cornerstone, and she finally drummed into my head the notion of putting things “in scene.” As I have a drama background, I don’t know why it took me so long to get that concept! I also remember Melvin Burgess’ advice at the Undiscovered Voices 2010 launch in London. It was very simple: “Don’t give up.”

What was your first reaction when you found out your book was to be published?
I screamed! It must not have sounded like a very happy scream, because my husband and son both rushed downstairs, thinking that something terrible had happened to me. That night, my husband and I went out for a meal and ended the celebrations with a champagne cocktail at the Grand Hotel in Brighton. It still seems a bit unreal!

Did you find it easy to get an agent?
Yes and no. Several agents had turned me down before I signed with Frances Lincoln, but I’ve since signed with Sallyanne Sweeney at Watson, Little, and I’m delighted to be working with her.

How long did was it between the initial deal and publishing day?
About 18 months. Of course, I did a pre-contract edit as well, so from my publisher first showing an interest to final publication date, it’s been over two years.

What are you working on at the moment?
As Frances Lincoln have sadly discontinued their YA list, my second book is going through the submissions process right now. In the meantime, I’m working on something new—a ghost story for slightly younger readers.

Who is the person that cheered you on and supported you through your writing?
I’ve been lucky to have had so many supporters, including my own amazing family. I must make special mention of my fellow UV2010 writers. They’ve been wonderful friends and allies. They’ve offered broad shoulders to cry on when the road’s been difficult, and been enthusiastic cheerleaders when the news has been good. I’m so thankful to be part of this talented and generous group of writers.


What advice would you give to aspiring and unpublished authors?
Besides never giving up? I think the main advice would be to ignore that nasty liar on your shoulder who tries to fill you with self-doubt. He’s a real toe-rag and can’t be trusted, even though he often sounds so convincing. Pay him no attention and just carry on! 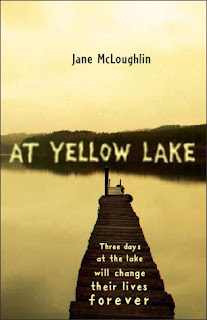 I think Jane truly shows how you must give up! Thank you Jane for such fabulous answers.

To find out more about Jane  McLoughlin:
Twitter: @jbmcloughlin