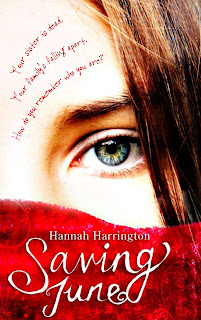 According to the puppy-of-the-month calendar hanging next to the phone in the kitchen, my sister June died on a Thursday, exactly nine days before her high school graduation. May's breed is the golden retriever - pictured is a whole litter of them, nestled side by side in a red wagon amid a blooming spring garden. The word Graduatio!! is written in red inside the white square, complete with an extra exclamation point. If she'd waited less than two weeks, she would be June who died in June, but I guess she never took that into account.


Goodreads Summary
Harper Scott’s older sister has always been the perfect one so when June takes her own life a week before her high school graduation, sixteen-year-old Harper is devastated. Everyone’s sorry, but no one can explain why.When her divorcing parents decide to split her sister’s ashes into his-and-her urns, Harper takes matters into her own hands. She’ll steal the ashes and drive cross-country with her best friend, Laney, to the one place June always dreamed of going, California.Enter Jake Tolan. He’s a boy with a bad attitude, a classic-rock obsession and nothing in common with Harper’s sister. But Jake had a connection with June, and when he insists on joining them, Harper’s just desperate enough to let him. With his alternately charming and infuriating demeanour and his belief that music can see you through anything, he might be exactly what she needs.Except June wasn’t the only one hiding something. Jake’s keeping a secret that has the power to turn Harper’s life upside down again.

*********
Why didn't anyone tell me this was set in California?? I would have included it in my California Week had I known! LOL
This is a contemporary read that will take you on an emotional journey as the main character comes to terms with the death and life of her sister. While we accompany Harper and her travelling buddies on their journey, we get a strong sense of how they felt and how they learnt to deal with the past in order to prepare for their own future lives. Suicide isn't an easy subject to read about and when it is someone so young, it really does pull a chord in your heart.  This book really pulls some punches, so be prepared to get a little emotional.
Through out the book, there is a strong sense of music and the author has provided a few lists at the back of song titles used within the book. The foundations of the story lay on top of the music chosen, allowing you  a clearer picture of how the characters felt. If you love your music, and having mixes for every mood you might be in then this book is definitely for you.
This book reminded me of Thelma and Louise. It had that urgency to it, the essential need for the road trip to happen, to make life better.
This is quite a hard review for me to write. Although I enjoyed the plot and thought it was extremely well written and found the characters to be very realistic, I really struggled to connect to the main character, Harper. None of the other characters bothered me at all, as they all seemed to be reacting in the way they should after an unexpected death in the family, but Harper appeared to calm about the whole thing.  She appeared to have this unbreakable shell that didn't crack until near the end of the book and by that point I really didn't feel anything for her.  This is just a personal opinion and I know that a lot of other reviewers really warmed to her, but it didn't happen for me. She acted very much like a typical teenager who can often only see how crap their own life will become rather than how the situation effects others. Now I know I am generalising here, because not all teenagers are like this, unfortunately it just seems to be the ones I come across. So with that in mind, I found it very difficult to feel any emotion for Harper, in the same way I didn't for Holden in The Catcher and the Rye.  They were too similar for my liking.
Having said that I absolutely loved Jake and Laney. I thought they were both such wonderful characters and very unique. Laney goes through her own roller coaster of emotions as she deals with issues that specifically concern her. Her sense of style really caught my attention too.
In some ways I loved this book I just didn't connect with the main character but I know that many of my blogging friends did. So please check out their reviews too.
Having said that, for a debut book, I am really looking forward to reading more from Hannah Harrington in the future.
at June 26, 2012