Britain at it's best, bringing you it's own version of IMM! All the books that came through my letterbox thanks to publishers and Royal Mail! Thank you Mr Postman for not squashing my books.
I have had a really busy week with books, so I am going to put them altogether as they are now beginning to take over my living room as I wait to sort them out. 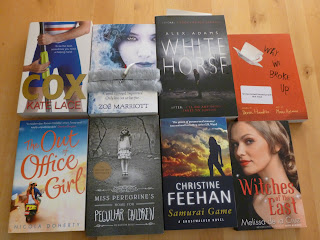 Won:
White Horse by Alex Adams published by Simon & Schuster - won over at Book Chick City
For Review:
Cox by Kate Lace - published by Arrow Books on July 12th. One of a selection of sizzling summer reads on the way to the book stores.
FrostFire by Zoe Marriott - published by Walker Books in July.  Some serious squeeing over this one as I have been waiting desperately for it.
Why We Broke Up by Daniel Handler published by Electric Monkey on the 6th August. This has already had a lot of success overseas and is a 2012 Printz Honour Book.
The Out of Office Girl by Nicola Doherty published by Headline on the 5th July.
Miss Peregrine's Home for Peculiar Children by Ransom Biggs published by Quirk Books. This has been out a while and I think it has just been released as a paperback.
Samurai Game by Christine Feehan published by Piatkus on the 3rd of July. This is the tenth book in the Ghostwalker series.
Witches of the East by Melissa De la Cruz - I received the second book in the series and Piatkus were kind enough to send me the first book. 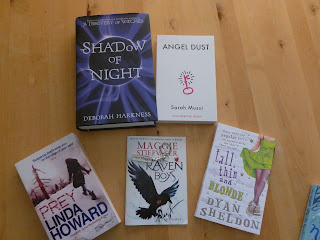 Shadow of Night by Deborah Harkness - published by Headline on the 10th July - this is the sequel to A Discovery of Witches.
Angel Dust by Sarah Muss- published by the brand new publisher, Hot Key Books in August. Very excited by the this and the launch of Hot Key Books.
Prey by Linda Howard - published by Piatkus on the 3rd of July. This is the second book by this author and is described as  a 'pulse-stopping, sexy, suspenseful adventure'. Can't wait to read it.
A sample and key ring of The Raven Boys by Maggie Stiefvater which comes out in September.
Tall, Think and Blonde by Dyan Sheldon published by Walker Books on the 2nd August.

Thank you to all the publishers who sent me books this week. I truly appreciate them.