Five Children and It by E. Nesbit 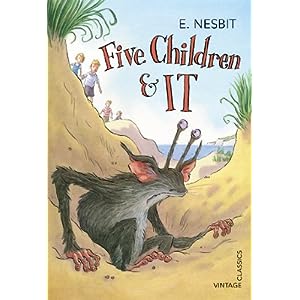 Pages - 238
Published by Vintage Children's Classics on 2nd of August 2012
The house was three miles from the station, but before the dusty hired fly had rattled along for five minutes the children began to put their heads out of the carriage window and to say, 'Aren't  we nearly there?' And every time they passed a house, which was not very often, they all said,'Oh, is this it?' But it never was, till they reached the very top of the hill, just past the chalk-quarry and before you come to the gravel-pit. And then there was a white house with a green garden and an orchard beyond, and mother said,'Here we are!'
Goodreads Summary
It" is a Psammead, an ancient, ugly, and irritable sand fairy the children find one day in a gravel pit. It grants them one wish a day, lasting until sunset. But they soon learn it is very hard to think of sensible wishes, and each one gets them into unexpected difficulties.

**********
The republication of this children's classic has been a little like delving into a past guilty pleasure. By rereading one of my favourite childhood classics, I have been able to indulge in my childhood memories.
This book has an obvious moral to it, reminding children that they should be careful what they wish for as they just might get what they have asked for. The young characters in the book are rather flippant with their wishes which end up getting them in a whole heap of trouble, as every wish goes horribly wrong.
The children don't seem to have any control over what they wish for and it was funny and exhausting at the same time to watch them suffer the consequences of their silly wishes.
I found I honestly couldn't read any of the Psammead dialogue without hearing Eddie Izzard's voice in my head. Since watching the film with my children, I just have Eddie down as the sand fairy and nothing will change that. Saying that, I do so love the Psammead, he really is my favourite character of the book.
Reading this book as a adult, I do notice more things than perhaps I would have been aware of as a child.
The writing is very descriptive and the story moves a long at an easy pace, a bit like a leisurely stroll down the river. With a lot of modern children's books, they tend to move at a faster pace and reading this book made me nostalgic for the times when everything just appeared to go slower.


What I found fascinating and extremely noticable, was how the children within the book were able to use their imaginations to have fun, an activity often sorely missed now among children.
The language appears quite archaic in today's modern society but Vintage have provided a very useful glossary to help you understand the unfamiliar terms. I really enjoyed all the extra material provided by the publisher at the back of the book which made me feel like I had a closer insight into the workings of the author.
It was such a joy to step back in time and it made me long for my books of yesteryear. It also made me want to read the two other books in the series. This really was an entertaining, lighthearted read, written by one of the pioneers of children's fantasy books.
at August 03, 2012