THE THIRTEENTH SUMMER OF BLUEBELL WHO?

As part of the The Twice Lived Summer of Bluebell Jones blog tour, I am really happy to have Susie Day guesting on the blog, telling us how the book got its title.

People often ask me how a book gets its title. You know, that one perfect phrase: telling just enough to catch the interest, not giving too much away. That magical collision of words that flow together, and stick in the mind and - above all - will look good on a book cover.

I’m guessing every writer has a different tale to tell about titles. I suppose it’s even possible that there’s some weirdo out there who finds it easy.

There are plenty of literary classics that briefly flirted with quite different names. Catch-11, anyone?

I’m in good company, finding it tricky. But this time... oh, it took forever. My book is funny and summery - and heartfelt and heartbreaking. It’s about a girl on the brink of growing up. It’s about time-travel. It’s about a family with a new baby on the way. It’s about a birthday wish. It’s about an invisible girl from the future, who gets to look back on one summer and try to get it right this time. There’s probably a kitchen sink in there too.

Having characters called ‘Blue’ and ‘Red’ (they’re the same girl, one year apart) took us down all kinds of bonkers avenues. With the inestimable aid of my editor Marion Lloyd and her genius assistant Anna Solemani, we wrote lists of everything associated with each colour: Moody Blue, Blue Moon, Caught Red-Handed, Red Letter Day... According to my notes, we seriously considered ‘Red Light’ (Red’s a sparky, perky character, who brings lightness to Blue’s anxious life). Next to it is scribbled the mournful comment “BUT: prostitution connections”. Yeah. Not really the direction we had in mind. 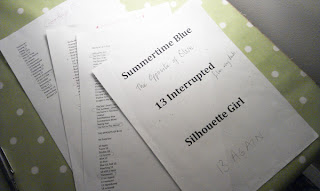 We gave up on colours, and tried out 13s; that’s Bluebell’s birthday at the book’s opening. But 13 Interrupted sounds like Girl, Interrupted. 13 Again sounds like 17 Again. How dare these other swines steal all the good titles before us!

Better Than Blue, The Opposite of Blue, The Summer I Lived Twice: all were contenders for a while. Even once we hit on Twice-Lived Summer... we took forever to pick out Bluebell’s last name. Bluebell Black, Bluebell Brass, Bluebell Price. (Looking through my notes, it appears I briefly toyed with calling her Bluebell Fish. That’s authorial despair for you.) In the end this last detail was settled, as it often is, with an office poll around Scholastic HQ. My title is a true example of teamwork. 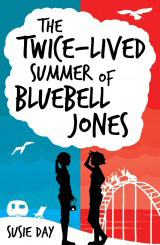 And now? I can’t imagine it being anything else. Oddly enough there seem to be a lot of wordy titles in YA at the moment: The Statistical Probability of Love At First Sight, The Girl Who Circumnavigated Fairyland in a Ship of Her Own Making... I think Bluebell’s in good company.

Thank you Susie for letting us in on the decision process. I can't imagine it as any of those other titles now.
The Twice Lived Summer of Bluebell Jones is available to buy now.
To find out more about Susie Day:
Twitter: @mssusieday
Website: http://www.susieday.com/
Facebook: http://www.facebook.com/susiedaywriter
Youtube: http://www.youtube.com/user/TheSusieDay

Want to watch the fabulous trailer for Susie's latest book?