Chuck a Book with Joanne Stapley

Featuring on Chuck a Book today I have the lovely Joanne Stapley from Once Upon A Bookcase
1) The best book you have ever read.
There are a number of books I class as favourites, but I now have two that share the official top spot. The first is high fantasy novel Pawn of Prophecy by David Eddings, because it’s the book that made me fall in love with reading, and he second is historical fantasy The Night Circus by Erin Morgernstern – the descriptions in this book! The imagery, oh my word, it’s just amazing! I want to go to that circus!

2) A book you loved from your childhood.
I never liked reading as a child, so when we had to do it at school, I’d always go back to the same two books that weren’t boring to read (ha!). I really enjoyed The Magic Finger and Fantastic Mr. Fox, both by Roald Dahl.

3) A book that made you laugh.
Oh, there are so many! But YA contemporary One Seriously Messed-Up Week in the Otherwise Mundane and Uneventful Life of Jack Samonsite by Tom Clempson is the first that comes to mind. That book is hilarious!

4) A book you could not finish.
Oooh. This I don’t like admitting to. When I first became a reader, most of the books I read were my Dad’s high fantasy novels, and he hammered into me this rule that if you start a book, you read it until the end – “How can you say you don’t like a book when you haven’t read the whole thing?” (Recently he tells me that rule only counts if you’ve got past the first 100 pages, pfft!) But I make him right, there have been some books I found so boring at the beginning, yet loved in the end.
However, the one high fantasy book/series I could never get into was The Lord of the Rings by J.R.R. Tolkien. I even tried an audiobook of The Fellowship of the Ring, as well as a physical book, it’s just not for me. But I expected not to like it as I didn’t enjoy The Hobbit. I always feel bad about not liking these books, though, because they’re like the kings of high fantasy, a genre I love, but I just can’t get into them. And they’re my Dad’s favourite books, so I kind of feel like a traitor, haha!

5) A book that made you swoon.
I’m going to go for the book I’m currently reading, because otherwise it’s hard to narrow down. Noah from YA contemporary Pushing the Limits by Katie McGarry is completely swoonworthy – even if he is troubled and I disagree with some of his lifestyle choices. The way he feels about Echo though... wow. They have some serious chemistry! And I’m not even half way through yet! Otherwise, anything by Jeaniene Frost, Rachel Vincent, Karen Chance... I could go on. Those ladies can write some pretty hot guys and some awesome sexual tension scenes – and with Vincent, in both adult and YA!

6) A book you can’t wait to read.
Oh my god, where to begin?! Once Burned by Jeaniene Frost, Blood Bound by Rachel Vincent, The Spindlers by Lauren Oliver, The Gathering Dark by Leigh Bardugo, The Shifting Price of Prey by
Suzanne McLeod, Witchblood by Emma Mills – all books that I have on my TBR pile! I won’t even start on the books that I don’t have! 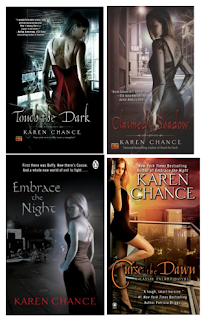 8) A book that made you cry.
There have been many, but the one that comes to mind first is Before I Die by Jenny Downham. Oh god how that book made me bawl!

9) Your guilty pleasure book.
I don’t have a guilty pleasure book. I don’t think anyone should feel embarrassed by enjoying reading – no matter what it is, or what other people think about that book – at least you are reading, which is more than can be said for a number of people. Though, if others were to look on my bookcases, they would say the Twilight series by Stephenie Meyer should go under this category.

10) A book that took you out of your comfort zone.
That would be The Ship Who Sang by Anne McCaffrey. I’m generally not a sci-fi fan (unless it’s a TV programme or a movie), but my Dad raved about McCaffrey’s novels, loved this one in particular, and practically demanded that I read it. It was a short book, but I was bored with every single page. I suppose the premise sounds quite good if it was a movie or something, but ugh. Just didn’t work for me. I’ve yet to pick up a book by McCaffrey since, even though my Dad thinks I’ll really enjoy her high fantasy Pern series. I’m able to read some light YA sci-fi now, but the genre as a whole has been tainted by this book for me.

Thank you Joanne for answering such difficulte questions.. If anyone would like to take part in Chuck a Book, please email me at vivienne_dacosta@hotmail.com and I will add you to the list.
at September 23, 2012

Email ThisBlogThis!Share to TwitterShare to FacebookShare to Pinterest
Labels: chuck a book