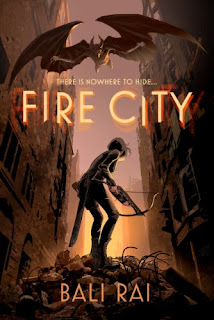 Reviewed by KM Lockwood.
480 pages
Published by Corgi in August 2012
‘I pulled my hood over my head and dropped down from the building, landing in their midst, my heart pounding. My foes roared with anger, their mouths scarlet, teeth clogged with human flesh.’

Goodreads Summary
Twenty-five years ago the world changed forever. A great war, which had raged for three years ended, and the reign of the Demons began... Within the crumbling walls of Fire City, fifteen-year-old Martha is a member of the resistance, a small band of humans fighting for freedom in a lawless and horrifying new world. Amidst the chaos of battle arrives Jonah, a handsome stranger with a thirst for revenge and a power to destroy the Demon rulers. As Martha and Jonah’s lives collide, the future of the resistance is altered forever. The battle for humankind will now begin. An epic story of catastrophe, survival and the power of humanity by multi-award winning author Bali Rai.
********
As you will have gathered from the short extract above, this book has its gory moments. The striking cover conveys the dystopian future portrayed in Bali Rai’s story (although crossbows don’t feature much, but demons definitely do). This should
appeal to its target audience of older teens and young adults – and the book certainly lives up to its image.
Fire City is recommended for confident readers who also enjoy violent films and games set in the near-future. The portrayals of carnage and its effects are graphic – this is not suitable for younger or more sensitive readers. Indeed less experienced readers might be confused by the shifting points of view and changes in time. These allow us to see the same event from different perspectives – a film-like technique which adds depth and complexity to this fast-moving tale.
The novel includes both personal stories and an element of wider political events that affect the characters we follow. This makes the twisting, turning plot more credible and relevant to the reader. As it says in the publisher’s blurb: think Hunger Games meets Terminator – with demons! You know it’s not going to be a nice cosy read.
I was impressed and pleased by the range of characters in The Resistance – there are strong female leads, a variety of ages and backgrounds and some touching emotional back-stories ( to say more might give spoilers). I also thought the elements of betrayal and uncertainty were well-handled – and very appropriate for the target readership. It is a complex plot – and very definitely leaves plenty of room for sequels, and possibly a prequel.
Despite the length and changes of perspective, it is not a difficult read. You would choose this for someone who likes graphic novels, post-apocalyptic films and games – and can cope with gruesome episodes. It might feature violence and deceit but fundamentally the story is on the side of humanity – there is gore but at its centre there is hope.
at October 16, 2012