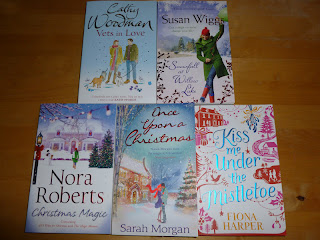 Lots of lovely Christmas fiction came my way this week.
Vets In Love by Cathy Woodman is the Christmas tale which revolves around the characters from the best selling Trust Me, I'm A Vet series. it is published by Arrow on the 22nd November. Thank you Arrow!
The next four books are all part of the exciting Christams book bundle that MIRA and Mills and Boons are publishing this year. They are publishing six books altogether to set you off onto a magical Christmas.
Snowfall at Willow Lake by Susan Wiggs
Christmas Magic by Nora Roberts
Once Upon a Christmas by Sarah Morgan
Kiss Me Under The Mistletoe by Fiona Harper
These will all be published in November. 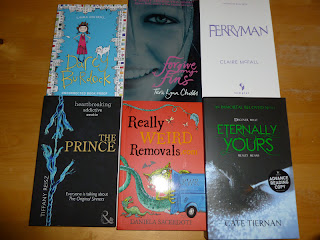 A big squee in this house on finally getting hold of Darcy Burdock by Laura Dockrill which I have waited for since the summer. This book will be HUGE! Published on the 28th February 2013 by Corgi. Thank you Corgi!
Forgive My Fins by Tera Lynn Childs has been out a while but Templar books kindly sent it to me to review.
They also sent Ferryman by Claire McFall which is described as an epic love story. It is due to be published in April 2013. Thank you Templar.
The Prince by Tiffany Reisz is published by Mills and Boon Spice in November and is the third book in the  Original Sinners series. When this book arrived I thought it was a joke, because it isn't my normal read. However, on finding out a little more about it, I have been drawn into this erotica series.  A review of a prequel appears later this week. Thank you Mills and Boon Spice.
Really Weird Removals by Daniela Sacerdoti - I will read anything this woman writes! She is totally awesome and seems to be able to write for any age. If you haven't read one of her books then you should.
Eternally Yours by Cate Tiernan is the third book in the Immortal Beloved series and will be published on the  17th of January 2013. I haven't read any of the books in this series yet, but I hope to soon. Thank you Hodder and Stoughton.

Little Red Riding Crop by Tiffany Reisz - technically I didn't buy this as it was free!
Darcies's Dilemma by Sue Moorcroft
Wannabe a Writer We've Heard Of? by Jane Wenham-Jones.
at October 28, 2012