I am drooling at all the new Christmas fiction coming out this month ready for the season of goodwill and merriment. During December I love to be lost in a chick lit book, in between stuffing my face with sweets and watching all the Christmas movies on television.  These are the books I am hoping to be curling up with this December.  I have attached the Goodreads summaries to get your mouths drooling too. Now I know there are many many others to add to this list, but these are the ones that really caught my eye.


Issy Randall, proud owner of The Cupcake Cafe, is in love and couldn't be happier. Her new business is thriving and she is surrounded by close friends, even if her cupcake colleagues Pearl and Caroline don't seem quite as upbeat about the upcoming season of snow and merriment. But when her boyfriend Austin is scouted for a possible move to New York, Issy is forced to face up to the prospect of a long-distance romance. And when the Christmas rush at the cafe - with its increased demand for her delectable creations - begins to take its toll, Issy has to decide what she holds most dear.
This December, Issy will have to rely on all her reserves of courage, good nature and cinnamon, to make sure everyone has a merry Christmas, one way or another...

Winter Wonderland by Belinda Jones
This is published by Hodder Books on November 8th.
Imagine waking up in a snow globe...

That’s how travel journalist Krista feels when she arrives in magical Quebec to report on Canada's glittering Winter Carnival.

Over ten sub-zero days Krista's formerly frozen heart begins to melt as she discovers an enchanting world of ice palaces, husky dog-sledding and maple-syrup treats galore. And then she meets Jacques, a man as handsome and rugged as he is mysterious…

The two share a secret that could bond them forever, but can they find a way to break through the protective layers around their hearts to warm up this winter wonderland?

A Winter Flame by Milly Johnson
Published by Simon and Schuster on October 25th
'Tis the season to be jolly… But can Eve find happiness through the frost…?Eve has never liked Christmas, not since her beloved fiancé was killed in action in Afghanistan on Christmas Day. So when her adored elderly aunt dies, the last thing she is expecting is to be left a theme park in her will. A theme park with a Christmas theme…And that's not the only catch. Her aunt's will stipulates that Eve must run the park with a mysterious partner, the exotically named Jacques Glace. Who is this Jacques, and why did Aunt Evelyn name him in her will?But Eve isn't going to back down from a challenge. She's determined to make a success of Winterworld, no matter what. Can she overcome her dislike of Christmas, and can Jacques melt her frozen heart at last…?

Married by Christmas by Scarlett Bailey
Published by Ebury on October 25th 2012
The countdown to her winter wedding has begun...Anna Carter wants the perfect Christmas Eve wedding. It's been on her 'to-do' list since she was a little girl stuck living in a children's home and dreaming of a far happier family life than she'd ever experienced. Now she's found the perfect Georgian country manor as a venue, to which she will be taken in a reindeer-drawn sleigh. She's got a show-stopping designer ivory-beaded wedding dress.
And she's even found her groom. Three years ahead of schedule, funny, sexy, handsome journalist, Tom, had swept her off her feet.
Only, now, two weeks before the wedding, Tom drops a bombshell that threatens to ruin everything.
But nothing is going to stop Anna's plans - not even the pesky inconvenience of discovering her perfect husband-to-be already has a wife...

The Holiday by Jane Green
Published by Penguin on the 8th November
If you had one wish this Christmas, what would it be?
Sarah wishes not to be lonely. She shouldn't be - not with Eddie, her husband, and their two children by her side ... but since Sarah waved farewell to the bright lights of the big city and moved to a picture perfect home in the country, her marriage is missing its usual sparkle. So when Eddie's job takes him away from home shortly before Christmas, the enforced break in their relationship - while tricky - probably couldn't have come at a better time.
But will his absence make her heart grow fonder? And if so, for whom? As seasonal cheer begins to flow, Sarah discovers rather a lot can happen in one holiday ... especially when it's Christmas.

A Merry Little Christmas by Debbie Macomber
Published by MIRA on the 5th of October 2012
A touch of Christmas magic!! Beth Morehouse was expecting presents under the tree, not a basket of abandoned puppies on the doorstep of 1225 Christmas Tree Lane! Now it’s a race to find them new homes before she and her daughters leave for their skiing trip. With just three days to Christmas, Beth needs a puppy miracle! To top off her worries, the girls have invited their dad, Beth’s ex-husband, Kent, for the holidays. Clearly they have visions of a mum-and-dad reunion under the mistletoe. But Kent’s new girlfriend might have other ideas… Across the road at 5-B Poppy Lane, the Shelton women are sharing relationship stories. Helen approves of the handsome soldier her granddaughter Ruth has brought home, but he reminds her so much of a man she once knew… Will Helen’s tales of romance lead Ruth to a happy-ever-after Christmas? With mistletoe and festive miracles, there’s nothing like a Cedar Cove Christmas!
Once Upon A Christmas by Sarah Morgan.
( I love her books! She is my guilty pleasure)
Published by Mills and Boon on the 5th of October.
What's your number one Christmas wish?Bryony's daughter has put a dad on her Christmas list. That leaves Bryony with one month to find the perfect man, so this year she's wishing for a miracle! While she's looking for love, her best friend Helen is doing the opposite. Her Christmas wish is to forget all about the white dress hanging in her wardrobe - and her faithless rat of a fiance. Helen and Bryony's festive cheer definitely needs a boost, so it's lucky that once upon a Christmas, wishes really do come true... 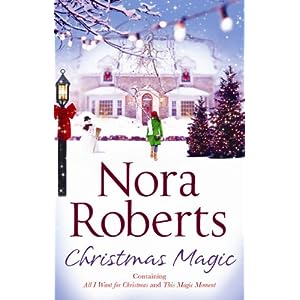 Christmas Magic by Nora Roberts
Published by Mills and Boon on the 5th of October 2012
All I Want for ChristmasIdentical six-year-old twins Zeke and Zach wished for only one gift from Santa this year: a new mum! But convincing their love-wary dad that their new music teacher, Miss Davis, was his destiny and sent by Santa wasn't as easy as they'd hoped...This Magic MomentFor Ryan Swan, who'd vowed never to give her trust again, master of illusions Pierce Atkins was the last man to whom she should give her heart. Especially since he was planning a death-defying stunt he might not even survive. Yet despite everything, when she was with Pierce, all Ryan's defences seemed to vanish...

Meet Me Under The Mistletoe by Abby Clemens
Published by Quercus on the 25th of October
Childhood friends Laurie and Rachel's lives have taken very different paths since they picked up their A-level results together. Laurie is living in London and dedicated to her career, keeping track of her friends on Facebook. Rachel is seemingly living the family idyll in a cottage in Yorkshire - except she worries her marriage is starting to show cracks. When Rachel's mother in law falls ill and needs treatment in London, and Laurie decides she needs to get away for a break, a house swap falls into place. Soon Rachel is braving the mean streets of London while trying to keep her family together, while Laurie tries to figure out how to work an Aga and befriend the locals - and forget the man who seems intent on breaking her heart. Will their relationships survive this test? And will they make it home in time for Christmas?

Email ThisBlogThis!Share to TwitterShare to FacebookShare to Pinterest
Labels: chick lit, christmas books, on my wishlist