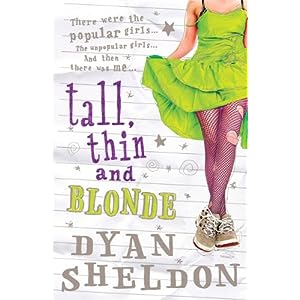 Image from Goodreads
Review by Georgina Tranter
Published by Walker Books
2nd August 2012
Pages -177
Look at them!” I said to Amy. I gestured to a table at the other side of the café. A bunch of girls from our school were sitting together, drinking diet soda and shrieking. They all looked like Miss Perfect Teenager. You know the type. Size six and pretty, with a lot of make-up and too many teeth. We’d only been in high school for a few weeks, but I already recognised three of them. Two were cheerleaders. The other was Rosie Henley, one of the most popular girls in the entire school. Rosie Henley was tall, thin and blonde. She was so beautiful that it was hard to believe that she had ugly feet and hair on her toes like everybody else does. “They’re so shallow and immature,” I went on. “I bet all they ever talk about it boys and clothes.”
Goodreads Summary

It was like overnight Amy had become a completely different person. All of a sudden we were in high school and my buddy, my pal, was one of those girls who worry about what they eat and what they wear and who they’re friends with.


The problem was, I was still me.


Jenny Kaliski and her best friend in the entire universe Amy have just started at Red Bay High School. They have always loved being different: In seventh grade Amy never wore the laces in her sneakers and Jenny always wore mismatched socks. In eighth grade, Amy had her hair spiked, and Jen had three holes pierced in her right ear. Now they are in the ninth grade and apparently they need to worry about being weird.


Overnight Amy starts to stop ordering burgers and fries, and eats salads, she gets tinted contact lenses and her hair gets blonder and straighter. Suddenly she’s on first name terms with Rosie Henley and her crowd, the ‘It’ girls; Jenny just doesn’t seem to fit in anymore.


At first Jenny tries to copy Jenny, she starts to lighten her hair, changes her clothes and even disastrously attends a school dance, but is that really who she wants to be?


This is the 8th book for young adults by Dyan Sheldon and I quite enjoyed it. I read it in one sitting and cheered for Jenny not to become something she wasn’t just because Amy had. It’s the perfect book for anyone who isn’t part of the in-crowd at school and questions whether you want to be that person for the status and belonging, or whether you would rather be who you are, regardless of what others think.


For Jenny this is a voyage of discovery, should she try to fit in with Amy’s new friends, or are the people she has been left to hang out with, the Martians, ultimately her real friends? An ideal read for anyone at secondary school who has been left questioning their own identity and how they ‘fit in’.
at November 05, 2012