Britain at it's best, bringing you it's own version of IMM! All the books that came through my letterbox thanks to publishers and Royal Mail!  Also all the books I have bought this week - as if I didn't have enough.
I haven't written one of these posts since long before Christmas, so there are a lot of books here.
Review 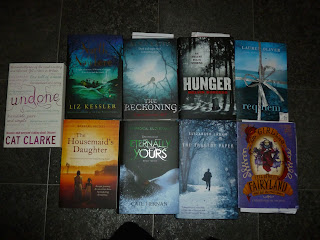 Undone by Cat Clarke published by Quercus in January I have been looking forward to this one for ages. I am a huge Cat Clarke fan and I will be devouring this one later this week.
North of Nowhere by Liz Kessler published by Orion Children's Books in January - I  have already read this book and it was fantastic. I have a spare copy which I am presently giving away in this competition.
The Reckoning by Alma Katsu is the second book in this series published this January. I haven't read the first but look forward to in the near future.
Hunger by Melvin Burgess published by Hammer Books in January. Just saying the word Hammer evokes chills down my spine.
Requiem by Lauren Oliver published by Hodder Books in March. This is the final book in the trilogy and I have been told I will be left reeling. I will keep you posted.
The Housemaid's Daughter by Barbara Mutch is published by Headline in January and is set in Africa. This is an adult novel and the lovely Musing Dragon is going to review it for me.
Eternally Yours by Cate Tiernan is published by Hodder Books in January too. This the third and final instalment in this series - one I keep meaning to read.
The Tragedy Papers by Elizabeth LaBans is published by Random House in January and should come with a box of tissues!
The Girl Who Fell Beneath Fairyland and Led The Revels There by Catherynne M. Valente is  the second book following the adventures of September in Fairyland. It is published by Corsair and the blog tour will be passing through here this week. 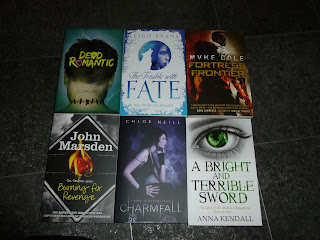 Dead Romantic by CJ.Skuse will be published in February by Chicken House. A humorous novel about creating the perfect boy!
The Trouble with Fate by Leigh Evans is the first book in the Mystwalker series. Published by Tor on the 23rd January. It will be the first female urban fantasy novel to be published by Tor UK.
Fortress Frontier is the second book in the Shadows Ops series by Myke Cole. Published by Headline on the 31st January. Described as 'Black Hawk Down meets the X-Men'.
Burning for Revenge by John Marsden is the 5th book in the bestselling Tomorrow series. The first book in the series was made into a film. I haven't read any of this series yet, but look forward to reading the first. This is published in February by Quercus.
Charmfall by Chloe Neill is the third book in the Dark Elite series, which so far I have only read book one. This was published in January by Indigo books.
A Bright and Terrible Sword by Anna Kendall is the third book in The Soulvine Moor Chronicles. Another series I have yet to read. This was also published in January by Indigo. 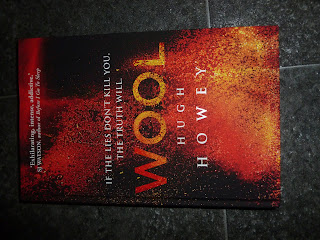 I haven't quite worked out how to turn pictures using Windows 8, so apologies that this is the wrong way round. Wool by Hugh Howey.
This is a self published phenomenon and the film rights have already been sold. Similar to The Road and The Passage as well as the The Hunger Games. This is published on the 17th January by Century.
I did buy a lot of books over Christmas for my Kindle but I will add them to the post next week as this one is already a long one.