Hidden Among Us by Katy Moran 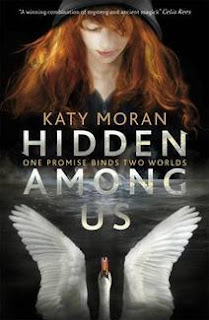 Pages - 293
Published by Walker Books in March 2013
I'm building a tower.
The red and yellow bricks are smooth in my hands, and the fire is making them warm. Rain bashes at the window. It's getting dark but Mum says it's not the night. The radio is playing. Mum has gone out to the barn to get wood. She's cross because the roof is leaking and our firewood keeps getting wet. Most days since we came to live here I sit in the wheelbarrow and go with Mum, but today I was making my tower and I said no.
Goodreads Summary
When Lissy meets a mysterious and strangely beautiful boy on her way to Hopesay Edge, she is deeply unsettled by their encounter.
She discovers that the boy, Larkspur, is a member of the Hidden, an ancient group of elven people, whose secrets lie buried at Hopesay Reach. Before long, Lissy and her brother Rafe find themselves caught by a powerful magic and fighting to escape a bargain that can never be broken.
******
From the opening chapter you get sucked into the dark Gothic atmosphere of this book. I was totally absorbed and lost in the story from page one. I had forgotten how much I loved stories about the fae world. However as I read on, I found myself wondering if these creatures were really fae – they are much more intense and alien like in nature, very creepy  to be around.
The story is told from various viewpoints and all in first person, so you can really feel the intensity of the emotions of the characters  leaving you breathless as they try to stop the inevitable. Lissy’s family is extremely disjointed and troubled. Many secrets have been hidden in the hope that time would make people forget, unfortunately time has a habit of remembering and catching up with you when you least expect it.
The characters are strong and determined, each fighting the evil that threatens in their own little way. Lissy came across as a little naïve to begin with, but as the truth came out you watched in awe as her character grew in strength. I loved Joe, he was obviously bewitched quite early on in the book and you felt his intensity and desperation to save everyone very early on.
The plot is fast paced, as time quickens. It was like watching an hour glass running out of sand as they all tried to stop the Hidden. So much happens in this book, the action never easing up. I held my breath many times as I raced through the story to see the outcome. The story literally spiralled down like a helter skelter as it got darker and darker sending a chill down my spine.
I love the way the author writes. There is such beauty and depth in her descriptions. The feelings of her characters capture your emotions as they fight with everything they have got.
This is one of the best fae books I have read in a long time. It’s like a darker version of the The Thirteen Treasures by Michelle Harrison. It also reminded me of Holly Black’s style of fae in her books such as Valiant and Tithe. I was completely lost in this dark but magical tale.