As Watch Over Me hits the book shops in paperback this month, I thought it might be good to share my review of it, which I wrote at the beginning of last year. 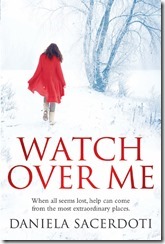 The strangest, most amazing day of my life, the day that changed my perception of life and death, started like any other. I woke up in the world I've always known, I went to sleep wrapped in a mystery.
Goodreads Summary
Eilidh Lawson's life has just been turned upside down. Her marriage is ending and she's lost her much longed-for baby. Mentally and physically exhausted, she's not sure what to do but feels oddly compelled to return to Glen Avich, a small village in the Scottish Highlands, where her family has lived for generations. Here, she meets her best friend from childhood, Jamie McAnena, who is raising his daughter alone. Following the death of his mother, Elizabeth, Jamie has resigned himself to being a family of two, closing himself off and devoting his life to his daughter, Maisie. What none of them can know is that it is Elizabeth who has called Eilidh back to Glen Avich. Though dead for three years, she has not been able to leave Jamie behind in his lost and lonely state. Now, she starts working behind the scenes for Jamie and Eilidh to get close again, but both are scared of repeating the past and Elizabeth's influence can only reach so far. An ethereal tale narrated from several different perspectives, "Watch Over Me" is a beautifully written debut novel. It is a poignant yet subtle story about letting go and moving on - with a little bit of help from beyond the grave.
**********
As I began to read this book, I was completely unaware of how the author was quietly captivating me and drawing me into the story. If you look at the book as a whole, you realise it is a basic love story, yet as you delve into the layers of the story you find it is so much more. There is magic hiding within the chapters.
The little village of Glen Avich, is enchanting. It reminded me of the mythical Scottish town in Brigadoon, one of my favourite musicals ever. It seems like a town that hasn't aged with time. Everyone still knows everyone else's business and goes about the same thing just as they have done since they were children.
I hated  putting this book down, as I needed to find out what would happen and I found myself desperate not to let go of this book, once I had finished it. I was so mesmerised by this beautiful village and its inhabitants, I was sad to finish it. I wanted to find the village and move there. Search out the characters to see how their lives had progressed, because the way they were written had brought them to life for me. There wasn't a character in the book, that I did not feel empathy for. I was convinced I could see snippets of people I know within them.
This book has a strong theme to it. It is about learning to accept the past in order to help you move on with the future. The characters had been trapped by the events of their past, which seem to cloud their judgement of the decisions they should make. However, a little helping hand from the spiritual side of life, helps to bring them together.
The book reminded me of two of my favourite authors. It had the warmth of Beth Hoffman's book and the magic of the books by Sarah Addison Allen. A book I will treasure and read again and again. I feel like I should buy hundreds of copies and give them out in the street. If you want a mesmerising, captivating read that presents the circle of life in such a magical way, then I suggest you read this book.
********
To celebrate the paperback publication of Water Over Me by Daniella Sacerdoti, the lovely Janne from Black and White Publishing has agreed to offer one person a bumper prize back of all three of Dani’s books. So how would you like to win Water Over Me,  as well as Dreams and Tide, the first two books in Daniela’s Midnight YA series? Enter your details in the Rafflecopter below. Open to UK and Eire only. Closes on the 25th March 2013.
a Rafflecopter giveaway
at March 18, 2013

Email ThisBlogThis!Share to TwitterShare to FacebookShare to Pinterest
Labels: daniela sacerdoti, watch over me