Today on the blog I thought I would do a little competition. I happen to have two brand new copies of books recently debuted by UK authors. So being the lovely blogger I am, I’m going to give them away to you. Below are the details of the two books I’m giving away. 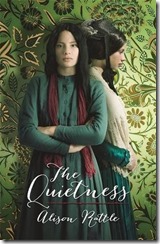 The Quietness by Alison Rattle
Published in March by Hot Key Books
When fifteen-year-old Queenie escapes from the squalid slums of nineteenth-century London, she has no idea about the dangers of the dark world she is about to become embroiled in. Initially thrilled at being taken on as a maid for the seemingly respectable Waters sisters, Queenie comes to realise that something is very wrong with the dozens of strangely silent babies being 'adopted' into the household.
Meanwhile, lonely and unloved sixteen-year-old Ellen is delighted when her handsome and charming young cousin Jacob is sent to live with her family. She thinks she has finally found a man to fall in love with and rely on, but when Jacob cruelly betrays her she finds herself once again at the mercy of her cold-hearted father. Soon the girls' lives become irrevocably entwined in this tension-filled drama. 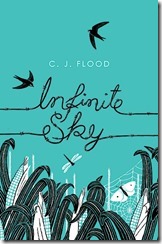 Infinite Sky by C.J. Flood
Published in February by Simon and Schuster
Iris Dancy’s free-spirited mum has left for Tunisia, her dad’s rarely sober and her brother’s determined to fight anyone with a pair of fists.
When a family of travellers move into the overgrown paddock overnight, her dad looks set to finally lose it. Gypsies are parasites he says, but Iris is intrigued. As her dad plans to evict the travelling family, Iris makes friends with their teenage son. Trick Deran is a bare knuckle boxer who says he’s done with fighting, but is he telling the truth?
When tools go missing from the shed, the travellers are the first suspects. Iris’s brother, Sam, warns her to stay away from Trick; he’s dangerous, but Iris can no longer blindly follow her brother’s advice. He’s got secrets of his own, and she’s not sure he can be trusted himself.
If you would like to enter this competition, you must be a follower of this blog. The competition is open internationally. Please fill out the rafflecopter form below. The competition closes on the 11th March. You can only win one book out of the two. So there will be two winners at the end of this competition.
a Rafflecopter giveaway
at March 04, 2013

Email ThisBlogThis!Share to TwitterShare to FacebookShare to Pinterest
Labels: competition