Out of Sight Out of Mind by Evonne Wareham 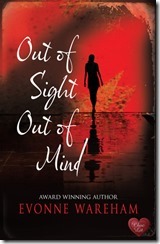 It was  a dark and dirty alley and a very expensive dress.
Madison Albi hesitated. She really didn’t want to go in there. Not in a shimmery little cocktail number and a pair of strappy sandals. Hell, not even in boots and a protective suit.
Published by Choc Lit in March 2013
Pages - 336
Goodreads Summary
Everyone has secrets. Some are stranger than others.
Madison Albi is a scientist with a very special talent – for reading minds. When she stumbles across a homeless man with whom she feels an inexplicable connection, she can’t resist the dangerous impulse to use her skills to help him.
J is a non-person – a vagrant who can’t even remember his own name. He’s got no hope, until he meets Madison. Is she the one woman who can restore his past?
Madison agrees to help J recover his memory, but as she delves deeper into his mind, it soon becomes clear that some secrets are better off staying hidden.
Is J really the man Madison believes him to be?
*******
I had wanted to read this book, ever since I heard the premise. Reading minds would be the most amazing skill to have, and the main character Madison can do it with ease. The book is told from alternate points of view in third person, with other minor characters sporadically interspersed. The best way that I can describe this book is  a  strong contemporary with  hints of paranormal in it. If I didn’t know better, after reading this I would think that mind reading was very much the norm in our society. At times the prose went a little over my head. The scenes written in the laboratories lost me a little and I found I had to reread them to get my head around  the procedures Madison planned to carry out. The author has clearly carried out in depth research to create authenticity by providing such detailed descriptions.
Madison is a really strong female character who doesn’t take no for an answer. She is completely in control of all aspects of her life and she isn’t willing to let go. Jay comes across quite innocent at the beginning of the story; you can’t help but feel sorry for him, although I’m not sure I would’ve taken him home! As Jay finds his feet, his mysterious hidden past really makes him rather gorgeous. I mean seriously, he sets the book alight. No wonder Madison fell for him. His past is very cleverly written. The author had me visualising so many bad things before I found out the truth.
The romance between Madison and Jay just sizzles off the page when they finally get together. All the original coldness and aloofness, builds with sexual tension, until it finally melts away quickly.   This book is set in London, but it had such a cosmopolitan feel to it, I often felt like I was in New York instead. It was only when the characters spent time in Wales, that I remembered this book was set in the UK.
The first half of the book took me a while to get into, but once the romance began the story really took off for me. As information was revealed I was stunned by the twists and turns the plot took. We found out who the real Jay was at the same time as Madison and it really added to the drama of the book. The second half of the book is fast paced and a real page turn as you rush to find out how it will all end.
Oh and the ending! That was just perfect. Like the ending of a swoonsome romantic film. I loved it so much. It’s the kind of ending that stays with you.
On the whole I really enjoyed this book. Strong characters, unusual premise and roller coaster ending.
at March 20, 2013

Email ThisBlogThis!Share to TwitterShare to FacebookShare to Pinterest
Labels: choc lit, evonne wareham, mind reading, out of sight out of mind, paranormal thriller