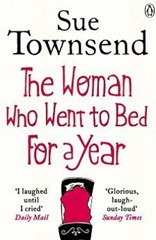 Published by Penguin in September 2012
Pages –434
After they’d gone Eva slid the bolt across the door and disconnected the telephone. She liked having the house to herself. She went from room to room tidying, straightening and collecting the cups and plates that her husband and children had left on various surfaces. Somebody had left a soup spoon on the arm of her  special chair – the one she had upholstered at night school. She immediately went to the kitchen and examined the contents of her Kleeneze cleaning products box.
The day her children leave home, Eva climbs into bed and stays there. She's had enough - of her kids' carelessness, her husband's thoughtlessness and of the world's general indifference. Brian can't believe his wife is doing this. Who is going to make dinner? Taking it badly, he rings Eva's mother - but she's busy having her hair done. So he rings his mother - she isn't surprised. Eva, she says, is probably drunk. Let her sleep it off. But Eva won't budge. She makes new friends - Mark the window cleaner and Alexander, a very sexy handyman. She discovers Brian's been having an affair. And Eva realizes to her horror that everyone has been taking her for granted - including herself. Though Eva's refusal to behave like a dutiful wife and mother soon upsets everyone from medical authorities to her neighbours she insists on staying in bed. And from this odd but comforting place she begins to see both the world and herself very, very differently.
*******
I grew up living, breathing and loving the Adrian Mole diairies. I would honestly say they got me through puberty. So I was intrigued to read one of Sue Townsend’s adult book to see if it had the same effect.
Being a rather busy mum of twins, I could completely relate to the main protagonist, you can feel her complete exhaustion after running around after the whole family for so long and the thought of just staying in bed is so appealing. Everyone at some point in their lives reaches a point where life has just got so tiring and difficult that they want to retreat and hide under the bed covers; it’s called human nature. This book highlights the situation and shows just what happens when you give in to those feelings.
I loved the quirkiness of the characters. The twins would have been measured against the autistic spectrum at some point if their parents had ever let them. They really don’t have a full grasp of the real world and struggle to understand it when left to fend for themselves. Brian was officially the world’s worst husband and I hated him from his arrival in the book.
This book looks closely at relationships and  as a reader you come away wondering whether you take people for granted. Eva’s family expected a lot from her and didn’t realise how much they relied on her until she stopped providing them with everything they need.
The humour at the beginning of the book really had me giggling. Sue Townsend has a knack of finding something funny in normally sober situations. A knack I loved so much in the Adrian Mole books.
The first half of this book is utterly brilliant, I can’t fault it at all. Unfortunately the same cannot be said for the second half. For me personally I felt it fell flat. The main character Eva  came across as completely selfish by the end of the story and I found I no longer liked her or understood her. Even the people around her had grown tired of her and lost interest in helping her stay in bed.  Each character within the book appeared to magnify their human eccentricities to the point where their lives became surreal.
I was hoping the ending would be a happy one and sadly I felt let down by it. The humour had disappeared from the book and I felt as though I had been left with some sad, old, selfish woman who couldn’t be bothered to do anything for herself anymore. I wanted her stay in bed to mean something but it just lost lack lustre by the end. Perhaps I don’t get the true meaning behind the author’s words and someone needs to enlighten me.
So for me, this book had a promising start, but didn’t meet the expectations set up to begin with.
at March 02, 2013