While The Others Sleep by Tom Becker 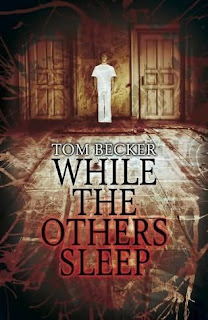 Published March 4th 2013 by Scholastic Children's Books
250 pages
It began with a whisper, a secret shared in the hush of midnight.
It began with the rasp of a match, and a spark of light in the darkness.
It began with the hint of a smile on a child’s face.
Summary from Amazon
When Alfie Mandeville's insomnia threatens to embarrass his wealthy family he is sent to Scarbrook House, a sanatorium for wealthy children. Troubled by the eerie atmosphere and skittish patients, Alfie's condition gets worse, not better. He falls under the spell of the charismatic and cruel William Travers, who seems to delight in bullying the other patients. A mysterious sighting by the water tower in the woods stirs up turbulent memories of Alfie's time in India. And as he lies awake one night, Alfie is haunted by visions of a strange creature moving through the darkness at the edge of the patients' beds. Are his tired eyes hallucinating, or is starting to lose his mind?
Reviewed by K. M. Lockwood
‘While The Others Sleep’ is a gothic horror story crossed with a psychological thriller suited to the 12+ reader. It has heaps of sinister 19th Century settings: a charred and blackened building, a wintry graveyard and a remote asylum, for example. The atmosphere is suitably claustrophobic and unsettling.
The uncertainty around the true natures of the different adolescents in the Victorian sanatorium, and the mind games that they play is well done. The reader’s sympathies shift from one character to another which racks up the tension effectively. For my part, this was the most successful aspect of the story: not knowing who was the focus of all the evil goings-on.
It is only fair to warn readers that towards the end of the book there are some rather gruesome moments. They are definitely not suitable for the nervous or squeamish. There are also flashbacks to Imperial India and the merest touch of romance, but the general effect is something you’d imagine Hammer Films creating.
You will enjoy this novel if you like the kind of horror that say Alan Gibbons or Barry Hutchison write – but set in a spine-chilling era full of carriages, servants and séances. A touch of Edgar Allen Poe for teens.
at March 22, 2013

Email ThisBlogThis!Share to TwitterShare to FacebookShare to Pinterest
Labels: paranormal thriller, scholastic, tom becker, while the others sleep