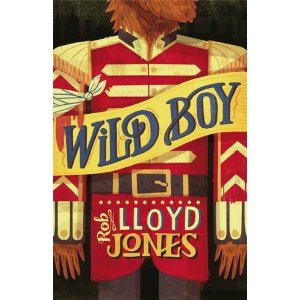 The master glanced at the showman. “We keep him in here. On account of the fighting.”

“Fighting?”
“Because of how he looks.”
The door opened with a groan, and they stepped inside. The room was musty and dusty and stank
of damp. A ragged crow was perched in a narrow window, its eyes gleaming like black diamonds in
the candlelight. Beside the window, another animal was nested among a bundle of sacks.
No, not an animal. It was a boy.
Published by Walker Books on the 4th April
Amazon Summary
BEHOLD THE SAVAGE SPECTACLE OF THE WILD BOY! London, 1841. A boy covered in hair, raised as a monster, condemned to life in a travelling freak show. A boy with an extraordinary power of observation and detection. A boy accused of murder; on the run; hungry for the truth. Behold the savage spectacle of Wild Boy. Ladies and Gentlemen, take your seats. The show is about to begin!
Reviewed by Caroline Hodges
*********
I was really enthused to read Wild Boy from the synopsis; I love underdog stories, and Wild Boy isn’t just one of those, he looks like one too!
The book ticks all the boxes for me; historical setting, circus freaks and monstrosities, and a mighty
fair share of Sherlock Holmes style detective work. The story is fast paced and inventive, revolving
around Wild Boy, a child covered in hair who starts his early years in an orphanage, rejected and
bullied by the other children. He then gets picked up by the owner of a circus freak show and
though performing under the banner of “THE SAVAGE SPECTACLE OF THE WILD BOY!” entails further embarrassment and humiliation, it allows him to engage in his favourite thing; watching
other people.
And so we discover the first hint of Sherlock Holmes in Wild Boy, his ability to ‘read’ a person just
by looking. But sadly, though ultimately his talent will lead him to salvation, his curiosity is also
the cause of his trials and tribulations throughout the book. As he is accused of a murder he didn’t
commit, we follow him on the run from the law and through fabulously described Victorian London.
Grime, smoke and sewers conspire against Wild Boy as much as the irate ‘coppers’ and though I
think if any of those policemen had a hint of good sense, they would have realised that no killer in
their right mind writes their name above the dead body, it’s sometimes fun to suspend disbelief and
just go with it.
I loved that the novel wasn’t clean cut; not only is the murderer not purely evil, but Wild Boy himself
is not wholeheartedly good either. He is subject to temptation and there are several instances
where he lashes out at the few friends he has. But his back story and the situations he finds himself
in ensure he is still a likeable character. Heroine Clarissa is a worthy “Watson” to Wild Boy, though I
would have liked to see her doing a bit more of the rescuing, less of this damsel in distress rubbish!
Though I guessed who the murderer was fairly early on, I’m not sure it was particularly obvious and
for those that don’t guess, the journey will be an exceedingly fun one.
An engaging tale unlike anything else out there at the moment.
at March 21, 2013