The Book of Doom by Barry Hutchison 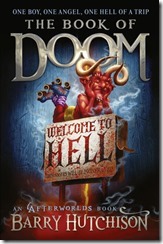 Bullets. He hated bullets.
He especially hated bullets that were travelling towards him at high speed., like the one that had just missed his head.
Published by Harper Collins in March 2013
Pages – 397
Goodreads Summary
There’s panic up in Heaven. They have mislaid the BOOK OF DOOM – the most important object in existence. Oopsy.
They think Satan might have stolen it, the sneaky little devil, so to save the world – plus, you know, quite a lot of embarrassment, fifteen year old Zac and his angelic guide Angelo are sent to retrieve it.
Sadly directions aren’t Angelo’s strong point and they soon find themselves just as lost as the book, wandering through Afterworlds such as Valhalla and Hades and encountering some colourful characters along the way…
Can the hapless pair make it to Hell and back?
*****
I can’t get enough of the Afterworlds series. Barry Hutchison writes in such a way, I end up all puffy faced by the end of the book where I have laughter so much, the tears have flowed. I really enjoyed his Invisible Fiends series, but I really think the Afterworlds books are his best yet.
Barry brings to life a hilarious version of Heaven and Hell. At the beginning we witness the banter that rolls between angels Gabriel and Michael, which had me continually snorting. Zac has been summoned by Gabriel to retrieve the Book of Doom  from Hell, in return for not having to spend eternity in Hell. His companion on the journey is Angelo, who has moments of adorability, weaved in with moments of evilness. He is the most entertaining sidekick I have ever come across, with his constant need for hugs and obsession with comics and superheroes. The quick witted conversations that fly between Zac and Angelo really keep the book alive with humour, hiding the developing  friendship that is growing. Every secondary character within this book is quirky, colourful and  absolutely entertaining.
The journey into Hell was fast paced and yet extremely entertaining. I loved all the different places described within the story. The story has a few surprises within it that really added to the brilliance already oozing out of the book.
Some familiar characters from The 13th Horsemen appear in this book and it was lovely to spend time with them again. They add some interesting twists to the story.
I absolutely loved this book and I can’t wait for the next instalment. If you have any reluctant readers in your house, Barry Hutchison’s books would be ideal to draw them into the world of reading.
at April 02, 2013