The Edge of Never by J.A. Redmerski 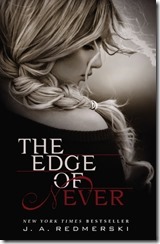 Natalie has been twirling that same lock of hair for the past ten minutes and it’s starting to drive me nuts. I shake my head and pull my iced latte toward me, strategically placing my lips on the straw. Natalie sits across from me with her elbows propped on the little round table, chin in one hand.
‘He’s gorgeous’ she says staring off toward the guy who just got in line.’Seriously, Cam, would you look at him?’
Published by Harper in February 2013
Pages – 427
Twenty-year-old Camryn Bennett thought she knew exactly where her life was going. But after a wild night at the hottest club in downtown Raleigh, North Carolina, she shocks everyone-including herself-when she decides to leave the only life she's ever known and set out on her own. Grabbing her purse and her cell phone, Camryn boards a Greyhound bus ready to find herself. Instead, she finds Andrew Parrish.
Sexy and exciting, Andrew lives life like there is no tomorrow. He persuades Camryn to do things she never thought she would and shows her how to give in to her deepest, most forbidden desires. Soon he becomes the center of her daring new life, pulling love and lust and emotion out of her in ways she never imagined possible. But there is more to Andrew than Camryn realizes. Will his secret push them inseparably together-or destroy them forever?
******
I’m not sure quite what to make of this book. On one hand I really enjoyed and on the other there were things that really niggled me. Some of the things I loved, I had niggles about too, which is odd in itself.
To me the strongest part of this book was the second half. I was swept away by the developing romance and the intensity of the relationship. It wasn’t instant love, because they were spending every moment together for nearly a month, so you could see how easily the relationship could develop.
I loved Andrew in spurts. During the first half of the story, he was just gorgeous. Attentive, caring and willing to protect a girl he barely knew from weirdo's. During the long bus rides at the beginning, the book reminded me of The Statistical Probability of Love At First Sight. It had that innocence to it and I thought it would develop into a sweet, romantic story. As the story progressed, Andrew’s personality changed dramatically and at times I was convinced the author had created the new Christian Grey. Thankfully that wasn’t the case and Andrew turned out to be a typical guy who thinks constantly about sex.
On reflection, I really think the book should have started at the beginning of Camryn’s road trip as that really is where the story starts. The first few chapters could easily have been used as snippets of story throughout the book, as the story developed. It took me ages to get into the story and that comes down to the first few chapters really not being needed.
The ending made me cry. I found elements of it completely unexpected and my emotions were really shaken by a rather major plot strand that perhaps should have been hinted at throughout the storyline and not left so dramatically until the end. If the situation that happened in the end of the book had occurred in real life there would have been signs for Camryn to be at least slightly suspicious.
I think this book really just needed a bit of editing to put things right that didn’t quite match up. I’m aware that this book was originally self published, so I’m wondering if perhaps it wasn’t edited as strictly as other books would be as the story was already out there in the public domain.
On the whole, I enjoyed the second half much more than the first even if I do think elements should have been hinted at earlier in the story. I whizzed through the second half with gusto, even though it took me so long to get through the first half.
Worth a read? I would definitely say so. You might see the story differently to me, as I think I had my editing hat on and I struggled to see past the things I wanted to change. The author definitely is talented and the end of the book will stick with me for a long time.
at April 18, 2013