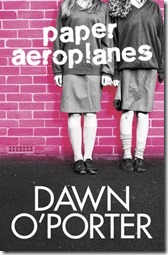 I take my place at the front bench of the science lab. A few weeks ago we had been dissecting pigs’ trotters and all the vegetarians were huddled in a corner trying not to look. I thought it would be funny to flick a bit of trotter at them from the end of my ruler. As it turned out, it wasn’t very funny. I only meant it as a joke but it landed inside Kerry Bowden’s pencil case  and she screamed like someone had run over her foot.
Published by Hot Key Books in May.
Pages – 272
Goodreads Summary
It's the mid-1990s, and fifteen year-old Guernsey schoolgirls, Renée and Flo, are not really meant to be friends. Thoughtful, introspective and studious Flo couldn't be more different to ambitious, extroverted and sexually curious Renée. But Renée and Flo are united by loneliness and their dysfunctional families, and an intense bond is formed. Although there are obstacles to their friendship (namely Flo's jealous ex-best friend and Renée's growing infatuation with Flo's brother), fifteen is an age where anything can happen, where life stretches out before you, and when every betrayal feels like the end of the world. For Renée and Flo it is the time of their lives.
With graphic content and some scenes of a sexual nature, PAPER AEROPLANES is a gritty, poignant, often laugh-out-loud funny and powerful novel. It is an unforgettable snapshot of small-town adolescence and the heart-stopping power of female friendship.
******
I really enjoyed reading this book, even if I did cringe at quite a few scenes. And I honestly only cringed because it opened a locked door in my mind that had kept hidden my teenage years which were a lot harsher than I remembered.
The style and setting of this book is the closest I have ever come to my own teenage years. I’m not saying personally that I was the type of girl who was desperate to lose my virginity, because I was quite the opposite. However, the way Renee and Flo approach relationships is the way I remember my friends reacting to boys. I grew up fast at secondary school and learnt so much that it was surprising I ever ventured into a real relationship at all.
For YA, this book is much more realistic to the life of teenagers of today.  You can’t read it without comparing it a little with the American YA we read, which is much more romanticised. American YA makes you swoon – UKYA often hits you with the reality stick.
The story is told from alternating view points between Renee and Flo, who don’t start off as best friends, but follow that pathway as the book unfolds. The book concentrates on the growth and development of their friendship, alongside family relationships and sexual awareness. Both girls come from dysfunctional families brought to their knees by bereavement and unemployment, showing how easily  a normal, healthy family life can quickly unravel.
I know the author kept diaries throughout her teens and this book really shows the evidence of that . You almost feel like you are living and breathing in the 90’s again as you get lost in the story.. When she mentioned Chicken in White Wine sauce in a tin, I instantly travelled back in time and found myself waiting for mine in front of the microwave in my parent’s house.
This book will appeal to fans of Melvin Burgess. The author has captured the essence of teenage life in the UK and laid it bare. No glamour or sugar coating, just real life with real teenagers.
at May 06, 2013