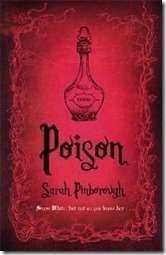 ‘She’s too old for that nickname,’ the queen said. She was standing at the window of the royal bedchamber and looking down at the courtyard below. Morning sun beat on the ground, but the air was still chilly. She shivered. ‘She needs to start behaving like a lady. A princess.’
Published by Gollancz in April  2013
Pages – 200
Amazon Summary
POISON is a beautifully illustrated retelling of the Snow White story which takes all the elements of the classic fairy-tale that we love (the handsome prince, the jealous queen, the beautiful girl and, of course, the poisoning) and puts a modern spin on the characters, their motives and their desires. It's fun, contemporary, sexy, and perfect for fans of ONCE UPON A TIME, GRIMM, SNOW WHITE AND THE HUNTSMAN and more.
*******
Over the years I’ve read a few retellings of fairy tales, but this one far outshines all of them. It’s  the best twisted retelling I’ve ever read. The author takes the traditional tale of Snow White and completely makes it her own.
You can’t read this book without commenting on the cover. The picture above doesn’t do it justice. It really is quite stunning in real life. The illustrations on the cover and inside on the place really add to the beauty of the book, making you want to keep it in your permanent collection.
Surprisingly, my favourite character within the book was Lilith, the wicked witch. Even though she was evil to everyone around her, her vulnerability and difficult childhood were easily glimpsed through her coldness. If her life had been different,she wouldn’t have turned out the way she did. I felt that she had been brainwashed to a certain extent to become the person she is. If I'm honest, I liked her so much more than Snow White, who had that teenager angsty attitude about her. Don’t expect to find a meek and mild Snow White, as you are more like to find her downing a pint with the dwarfs. She is much more of a feisty character in this version and a  bit of  a strumpet on the side; quite happy to lose her innocence as soon as she could. Less Snow White, more Grubby Knickers Grey!
I loved the inclusion of characters from other classic fairy tales. It was interesting to see how the witch from Hansel and Gretel as well as Aladdin were included in the story to give it a fresh appeal.
The writing really stands out as the sentences flow beautifully. Very poetic prose. The words almost sing to you and your easily lost in the story. I actually read the book in one sitting as I couldn’t put it down.
If you are expecting the traditional ending to Snow White, you will be sorely disappointed, as the author has given it an unusual twist, creating a much more edgy, modern finale to the tale. I adored this book and can’t wait to read more from this author.