Waiting on Wednesday (11) - The Weight of Souls by Bryony Pearce

Waiting On Wednesday is a weekly event, started by Jill at Breaking The Spine, highlighting future book releases everyone is waiting on!
I’m really looking forward to The Weight of Souls by Bryony Pearce, which will be published by Strange Chemistry in August.  I read the author’s debut book, Angel Fury back in 2011 and enjoyed it. I can’t wait to read this one now! 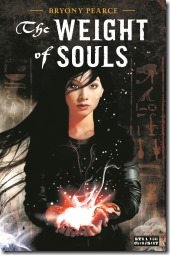 Book Summary
Sixteen year old Taylor Oh is cursed: if she is touched by the ghost of a murder victim then they pass a mark beneath her skin. She has three weeks to find their murderer and pass the mark to them – letting justice take place and sending them into the Darkness. And if she doesn’t make it in time? The Darkness will come for her…
She spends her life trying to avoid ghosts, make it through school where she’s bullied by popular Justin and his cronies, keep her one remaining friend, and persuade her father that this is real and that she’s not going crazy.
But then Justin is murdered and everything gets a whole lot worse. Justin doesn’t know who killed him, so there’s no obvious person for Taylor to go after. The clues she has lead her to the V Club, a vicious secret society at her school where no one is allowed to leave… and where Justin was dared to do the stunt which led to his death.
Can she find out who was responsible for his murder before the Darkness comes for her? Can she put aside her hatred for her former bully to truly help him?
And what happens if she starts to fall for him.
at May 22, 2013

Email ThisBlogThis!Share to TwitterShare to FacebookShare to Pinterest
Labels: bryony pearce, strange chemistry, the weight of souls, waiting on wednesday