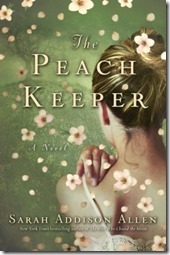 The day Paxton Osgood took the box of heavy-stock, foil-lined envelopes to the post office, the ones she’d had a professional calligrapher address, it began to rain so hard the air turned as white as bleached cotton. By nightfall, rivers had crested at flood stage and, for the first time since 1936, the mail couldn’t be delivered.
Pages – 273
Published by Hodder and Stoughton in 2011
Goodreads Summary
It’s the dubious distinction of thirty-year-old Willa Jackson to hail from a fine old Southern family of means that met with financial ruin generations ago. The Blue Ridge Madam—built by Willa’s great-great-grandfather during Walls of Water’s heyday, and once the town’s grandest home—has stood for years as a lonely monument to misfortune and scandal. And Willa herself has long strived to build a life beyond the brooding Jackson family shadow. No easy task in a town shaped by years of tradition and the well-marked boundaries of the haves and have-nots.
But Willa has lately learned that an old classmate—socialite do-gooder Paxton Osgood—of the very prominent Osgood family, has restored the Blue Ridge Madam to her former glory, with plans to open a top-flight inn. Maybe, at last, the troubled past can be laid to rest while something new and wonderful rises from its ashes. But what rises instead is a skeleton, found buried beneath the property’s lone peach tree, and certain to drag up dire consequences along with it.
*******
Normally Sarah Addison Allen is one of my fail safe authors – one I would turn to in search of comfort reads as every time she writes, she installs in me that feel good factor. However, I have to say, The Peach Keeper isn’t one of her best books. There are aspects I loved but there are also aspects I really didn’t like, so I’m on the fence when it comes to this book.
The setting drew me in straight away. The author is marvellous for recreating these small Southern fictional towns that everyone wants to live in. Everyone knows everybody else’s business, but that’s OK. By the end of the book, you feel like you could walk down the street and name everybody that you come across.
The female characters are strongly represented here as always. The bond of friendship and time is really strong as the story reveals secrets of the past that will create future friendships. Willa and Paxton are totally different from each other but history brings them together.
Usually with this author’s books there is a strong sense of magical realism. Unfortunately this one seemed to lack it for me. It was referred to, but it felt vague and confusing. By the end of the story it was merely a line mentioned. There were aspects of it that I expected to be explored further, yet they appeared to be told to us rather than shown.
A huge part of this story deals with an event that happened many years before. I think this book would’ve worked better if more of it had been written during the time of the events. Perhaps alternate chapters set in the 1930’s, which would have given us a stronger insight into the enigmatic and mysterious character who is absent from the book but plays such an important role in the story.
On the whole, there was too much telling rather than showing for me in this book. Events are tied up too easily and nothing really seem to happen by the end. Even the last chapter told us what happened with the characters. I would’ve liked to explore their future in more detail.
Having said all that, I did enjoy the book. It was an effortless read and one that bewitched me in a way only Fannie Flagg and Beth Hoffman have ever managed to do. If you want an easy read, then this one might be for you. If this author is new to you, then I would suggest started with The Sugar Queen first.
at June 15, 2013