Charm and Strange by Stephanie Kuehn 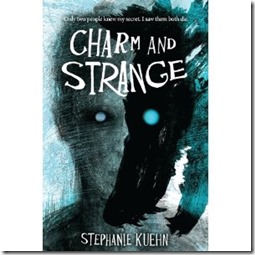 Don’t. Please don’t say my name. You have no idea who I really am.’’
Published by Electric Monkey (an imprint of Egmont) in June 2013
Hardback 259 pages
‘Summary from Egmont’s own site.
No one really knows who Andrew Winston Winters is. Least of all himself.
He is part Win, a lonely teenager exiled to a remote boarding school in the wake of a family tragedy. The guy who shuts the whole world out, no matter the cost, because his darkest fear is of himself . . . of the wolfish predator within.
But he’s also part Drew, the angry boy with violent impulses that control him. The boy who, one fateful summer, was part of something so terrible it came close to destroying him.
****

Reviewed by K. M. Lockwood
This psychological thriller is definitely one for the top end of the teen/YA market. It straddles the border into New Adult territory – and many readers beyond their twenties who like dark and complex books will get a lot out of it. It is not suitable for younger children.
The cover on the Hardback UK edition with its illustration by Jim Kay (the artist who collaborated with Patrick Ness on A Monster Calls) sets the tone accurately.
On her website, Stephanie Kuehn says “I think Mr. Kay has perfectly captured the emotions and conflict of the story.”
As a reader, you do need to be paying close attention pretty much all of the time. There are a number of plot strands and two main timelines which intersect frequently. You have a very unreliable narrator in the shape of Win/Drew and it can feel that you don’t know what is true at all at some points. Of course, this makes you want to read on all the more.
Right from outset, there is implied violence and tragedy –it is not a comfortable read. It’s intense and full of menace and yet despite this darkness, it does have a convincing and positive resolution. I don’t want to give any spoilers, but there is a sense at the end of things being worked out, of hope and the power of friendship.
It’s only fair to warn potential buyers that there is some rather extreme language. In view of the subject, it works well in context. Similarly, there is a degree of implicit and occasionally explicit violence. It is not gratuitous.
Generally, Egmont is seen as a ‘literary’ publisher. Certainly, this is a book which requires intelligence to get the best out of it – but the vocabulary and syntax used is quite easy to follow, on the whole. The complexity is in the ideas and the shifts of perspective – just what has happened?
You will really enjoy this if trying to understand the behaviour of a troubled central character intrigues you; if confronting the darker sides of human psychology makes you want to read on.
at July 25, 2013

Email ThisBlogThis!Share to TwitterShare to FacebookShare to Pinterest
Labels: charm and strange, cross over novel, egmont