Fallen Too Far by Abbi Glines 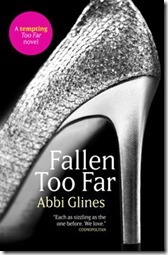 Trucks with mud on the tires were what I was used to seeing parked outside  a house party. Expensive foreign cars weren’t. This place had at least twenty of them covering up the long driveway. I pulled my mom’s fifteen-year-old Ford truck over onto the sandy grass so that I wouldn’t be blocking anyone in. Dad hadn’t told me that he was having a party tonight. He hadn’t told me much of anything.
Pages – 246
Published by Simon and Schuster in July 2013
Goodreads Summary
When Blaire Wynn's mother passed away, Blaire's life changed in an instant. Having cared for her sick mother for the last three years, suddenly Blaire has to leave the small farmhouse in Alabama they shared, to move in with her father and his new wife in their sprawling beach house along the Florida gulf coast. But what she isn't prepared for is the lifestyle change that comes with the move, and she knows she'll never fit into the new world of luxury and extravagance that suddenly surrounds her.
Even worse, her father has run off to Paris for the summer with his wife, leaving her stranded with Rush, her new stepbrother, who's irritating, arrogant and… seriously sexy. Rush is as spoiled as he is gorgeous; his famous father's guilt money, his mother's desperation to win his love, and his charm are the three reasons he has never been told no. Blaire knows he is anything but good for her, but somehow she can't fight the attraction she's feeling, especially when she starts to think the attraction might be mutual… Rush is jaded and has secrets Blaire knows she may never uncover but even knowing all of that Blaire just may have fallen too far.
******
I honestly can’t get enough of Abbi Glines’ books. I love them so much that I actually tried to analyse this one to see what it was that made me practically inhale them. Starting with the first chapter, Abbi had me hooked when I realised Blaire’s mother and father were obviously separated and Blaire’s dad was living a life of luxury while his daughter struggled to make ends meet. I got all that in the first paragraph and needed to know more. On looking closely at the first chapter, I realised it was a perfect blend of dialogue, setting, action, emotion and exposition. Seriously! I actually highlighted the parts to see and it was an even mixture! No wonder I can’t stop reading these books!
The characters hold your hearts string straight away. Blaire has a gentle  toughness surrounding her like a fragile egg shell, that is easily broken. She is innocent when it comes to guys, similar to many of Abbi’s female leads, but she knows she wants to lose that innocence as quickly as she can. Rush is a total jerk to begin with, but hot with it. As the story progresses I became a huge fan of Rush’s and I look forward to meeting him again in the following two books.
The story has a surprising twist at the end. I knew there had to be something not quite right about Nan, but I wasn’t expecting it to be what it was. I was also really shocked at where the characters were left at the end of the book.
Normally I would have issues with a relationship involving two step siblings, but I was enjoying the romance so much, it kind of flew over my head. Blane and Rush didn’t know each other; they hadn’t grown up together so I didn’t feel they had to act like brother and sister.  The sexual tension between these two characters, who both knew they should stay away from each other, was mind blowing. I’ll say it again as I’ve said before, Abbi knows how to write hot male characters that have you swooning.
The secondary characters really come to life in this book. Woods turns out to be a Marcus style character, which Abbi brought to life in the Sea Breeze series. I really like Grant and I seriously hope he will be reappearing in the other two books. Bethy made me giggle – she came across as hot, white trash and I loved her for it.
This series is now running head to head with the Sea Breeze one for me, as I struggle to work how which I love the best! It might have to be a tie.
If you haven’t read any books by Abbi Glines yet, then you are missing out. Buy every single one of them and take them on holiday with you. I promise you will read the lot by the time you come back.
at July 19, 2013