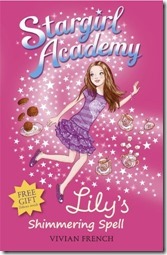 I sort of knew I’d put too much tea in the cup as soon as I’d poured it out, but it isn’t very far from the kitchen to the living room and I told myself I could manage. I very nearly did. I got as far as my great-aunt’s armchair - but then – OUCH! A tingle in my elbow. It was really sharp. And OOPS! -there was tea everywhere.
Published by Walker Books on the 4th July 2013
Goodreads Summary
Welcome to Stargirl Academy, the magical school in the clouds! Previously a rather old-fashioned establishment, it has been reopened by its head teacher to train children to be modern day fairy godmothers. Fairy Mary McBee selects a group of girls: Lily, Ava, Madison, Sophie, Emma, Olivia – and Melody and Jackson who think they’re better than everyone else. The girls learn lots of spells – shimmering, starry,
shining, sparkling, glittering and twinkling ones – which they use to fix problems and help people in trouble. For every successful mission they gain a star, and once they
have six stars they will be fully qualified stargirls! Ava leads the first mission and decides they should teach Lily’s horrible great aunt a lesson. With a new spell the girls convince Great Aunt Acidity that supernatural forces are angry with her: floating crockery and a message written by a teapot make her change her ways. It’s a triumph – they’ve earned their first star.
******
When my girls were growing up, one of our favourite series to read from was the Tiara Club books by Vivian French – such a talented author who knew how to make a book sparkle with magic so easily. So I was over the moon to hear that the author had written a brand new series for girls. Aimed at a slightly older market, it would appeal to the girls who had just grown out of the Tiara Club series and were ready for something new.  The author has taken hold of the fairy godmother stories and given them a modern makeover.
Now I have a huge problem about telling you anything about the book. I made the following promise when I read the book.
‘I will never speak of Stargirl Academy to others outside these cloudy walls, whatever they ask and whatever they offer. This I solemnly promise, for now, always and forever.’
I signed it and everything! So what can I tell you without breaking my promise. Well there are six awesome girls who have all been sworn into the Stargirl Academy and each has a book written all about them. There are two other girls who really think they are older, wiser and superior than the others but I knew straight away they weren’t as clever as they thought.
Each book stars with a roll call of characters each with their picture, just like the kind of books I used to write as a child – I always had hand drawn pictures of all the characters before the story would even begin. The book also includes two letters, one from Fairy Mary who is head teacher at Stargirl Academy and one from the main character of the story. There is also a copy of a couple of pages from the spell book!
The story is entertaining and easy to read. A strong theme of friendship and helping each other wafts off the pages. The characters are simply magical. I was completely lost in a world full of magic spells and excitement.  I can see children going mad for this wonderful new series.  Every child deserves to experience the magic of  Stargirl Academy.
at July 03, 2013