My Friend The Enemy by Dan Smith 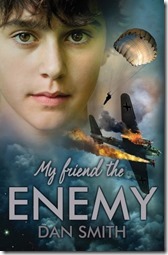 I was in the far corner of the woods, setting snares, when the siren started.
I stopped.
Crouched low with my arms out, my fingers laying the wire in the right position, I stopped dead.
Published by Chicken House in July 2013
Pages – 302
Goodreads Summary
Summer, 1941. For Peter, the war is a long way away, being fought by a faceless enemy. Until the night a German plane is shot down over woods that his missing dad looked after before he went off to fight.
Peter rushes to the crash site to see if there’s something he can keep, but what he finds instead is an injured young German airman. The enemy. Here.
And helping him seems like the right thing to do...
*****
I’m not normally one for historical war time books but this book appealed to me. I had spoken to the author, Dan Smith, quite regularly on Twitter and I was intrigued about the change from writing for adults to writing for children.
For me the cover of the book screams – boy’s book! But that really isn’t the case. Although the story is written in first person from Peter’s point of view, you watch his strong friendship with Kim grow as the story progresses, so I know it will appeal to everyone.
I loved the detailed descriptions in this book. I felt that I could almost step into 1941. The author has really done his homework and brought the war years back to life. I’m sure while reading it, I could smell the tripe cooking. The difficulties with food and rationing were so clearly obvious  and it left me wondering how as a nation we would cope if we had to return to those days. Where food is now fast and in abundance, I think we would struggle to live off such meagre portions. Not to mention digging up our landscaped gardens to fit in some home grown vegetables!
I warmed instantly to the relationship between Kim, Peter and Erik. Kim and Peter were such wonderful characters who acted with more dignity, courage and honour than the contrasting British soldiers within the book. They wanted to treat Erik in the way they hoped their loved ones would be treated while fighting abroad. Erik was a young German soldier, but he cared for Kim and Peter too. He trusted them and was prepared to abandon his hideout to save them. Throughout the book, you find yourself questioning the war, especially when you see innocents from both sides of it caught in such difficult situations.  I really do think the author created some memorable characters who highlight the humane side of the war.
I believe this book would make a great accompaniment to any class studying World War 2 as it gives such an insight into what life was really like during such hard times. It has elements of Whistle Down The Wind in it, although the lines are blurred as to whether Erik could be considered a criminal. To me, it felt as though he was another innocent person fighting someone’s else war.
If you love books such as Goodnight Mr Tom, I’m sure you will enjoy this.
at July 08, 2013