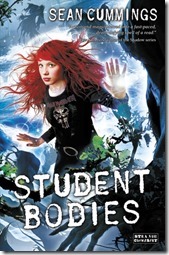 Mum is grumpy and it has to do with my newfound romantic life. Ugh.
I’m not sure what’s supposed to happen when you’re dating someone you’ve known since you were little. I mean,I’d actually seen Marcus Guffman in his Spider-Man underpants when he was eight – that was the same year he gave me chickenpox.
Published by Strange Chemistry in September 2013
Pages – 304
Goodreads Summary
Whoever said being a teenage witch would be easy? For fifteen-year-old Julie Richardson and the city’s resident protector from supernatural evil, the Left Hand Path doesn't give a damn if you've found true love for the first time in your life. There’s someone lurking the halls of Crescent Ridge High School with enough malice to unleash an epidemic of Soul Worms – supernatural larvae that feed on the very fabric of a victim’s humanity.
After witnessing the death of one of the most popular kids at school, Julie and über genius boyfriend Marcus are in a race against time to find out who is behind the attacks. All the evidence points to a horrifying plot at the City Weir during the Winter Solstice; the place where icy waters of the Bow River and a thunderous spillway will mean the deaths of more than a hundred of Julie’s classmates.
If she has any hope of saving their lives, she’ll need a little help from a coven of white witches and an Aboriginal mage whose snarky attitude is matched only by her magical prowess.
******
This book smashes the whole concept of Second Book Syndrome to smithereens! I really enjoyed the first book, Poltergeeks, but I really think Sean Cummings has taken Student Bodies to a whole new level. This book actually kicks butt!
I LOVE JULIE! She has an amazing, original voice, brimming with sassiness and attitude. It’s like listening to a gobby teenager talking to you; she has some of the best snarky one liners I’ve ever read.  It’s easy to believe that she is a normal teenager with magical powers. Another favourite character of mine is Betty the dog. Though I’m not very happy about events that occurred in the novel concerning this character…
The humour in this book mixes seamlessly with the darker aspects of the story. The author can switch from one to the other without even have to crack his knuckles.  I’d love to see Sean Cummings write a full on comical escapade, because I know it will have me falling off my seat with laughter.
This book has a strong theme of bullying  in it, especially focusing on the effects of cyber bullying, which fills our newspapers on a day to day basis. The author has managed to display the full effects of the  intensity of  the internet age, where the kids of today can never escape from the bullying that plagues them at school.
I loved the involvement of the Inuits in this story and how shamanism walks hand in hand with witch craft. I found these intertwined created a magically explosive story. The story involves some vibrant new characters who really added depth to the plot.
This book is even faster in pace than its predecessor, with a punch in the gut ending, that left me breathless. Tackling difficult current teenage issues, while cloaked in urban fantasy. A cracking good read.  I can’t wait to find out what happens in the final book!
at September 18, 2013