She Is Not Invisible by Marcus Sedgwick 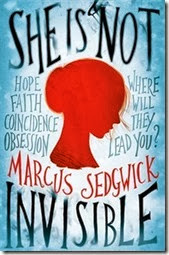 One final time I told myself I wasn’t abducting my little brother.
Published by Indigo in October 2013
Goodreads Summary
Laureth Peak's father is a writer. For years he's been trying, and failing, to write a novel about coincidence. His wife thinks he's obsessed, Laureth thinks he's on the verge of a breakdown.He's supposed to be doing research in Austria, so when his notebook shows up in New York, Laureth knows something is wrong.
On impulse she steals her mother's credit card and heads for the States, taking her strange little brother Benjamin with her. Reunited with the notebook, they begin to follow clues inside, trying to find their wayward father. Ahead lie challenges and threats, all of which are that much tougher for Laureth than they would be for any other 16-year old. Because Laureth Peak is blind.
*****
This book knocks you sideways, while at the same time challenging the way you think and view the world around you. I sat on the train to London to read it and by the time I finished my return journey, I’d finished. I nearly missed my stop as I was so engrossed in this book. A week after reading it, I’m still analysing the world around me and looking for clues.
This book looks at the whole concept of coincidence. It looks at the way we analyse events that occur as coincidences. The more extraordinary a coincidence is, the more preposterous and unbelievable other people will think it is. I’m a great believer in thinking that everything happens for a reason and I’m convinced coincidences don’t just occur because statistical laws mean they will eventually happen, so I found this book fascinating to read. In fact, I had my very own coincidence while reading it. 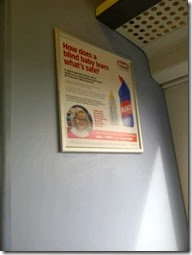 Now this picture might leave you befuddled but anyone that has read the book will realise very early on  that Laureth is blind. I was gobsmacked to be reading about coincidences and blindness, and then to see this sign!!
Laureth is a strong female character who doesn’t let her disability define her. She can never change or improve her sight but she has learnt how to live with it. She has tactics in place to stop people feeling sorry for her; she even goes to great lengths to hide her blindness in order for people to see her for who she really is, to step past her disability and see her abilities. I don’t know any blind people personally, but I felt this book gave an accurate portrayal of what life must be like if you were blind.
The book crosses from London to New York as Laureth goes in search of her father, who has disappeared. She is frantic and worried that something seriously bad has happened to him. In her quest to find him, she hits upon coincidences in rapid succession, which should make the plot unbelievable. However the author has worked these coincidences in such a way that you believe everything that happens.
This is a different direction from the author’s previous novels. Gone is the Gothic tone and feel, that normally sends shivers up my spine. If I were to describe this book in relation to others I would describe it as a mixture of Maggot Moon, and The DaVinci Code. If you ever saw the film, Serendipity, it has elements of that in it too.
The author hasn’t just provided you with a fast paced thriller, but he has also left you with ideas and puzzles to decipher. I challenge you not to come away from this book searching out the coincidences that occur in your life. I will definitely be recommending this book highly in the future as it stands out from the other YA books around at the moment.
at October 03, 2013

Email ThisBlogThis!Share to TwitterShare to FacebookShare to Pinterest
Labels: blindness, coincidences, indigo, marcus sedgwick, she is not invisible