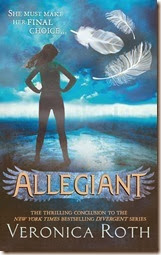 I pace in our cell in Erudite headquarters, her words echoing in my mind: My name will be Edith Prior, and there is much I am happy to forget.
Pages – 526
Published in October 2013
Goodreads Summary
The faction-based society that Tris Prior once believed in is shattered—fractured by violence and power struggles and scarred by loss and betrayal. So when offered a chance to explore the world past the limits she’s known, Tris is ready. Perhaps beyond the fence, she and Tobias will find a simple new life together, free from complicated lies, tangled loyalties, and painful memories.
But Tris’s new reality is even more alarming than the one she left behind. Old discoveries are quickly rendered meaningless. Explosive new truths change the hearts of those she loves. And once again, Tris must battle to comprehend the complexities of human nature—and of herself—while facing impossible choices about courage, allegiance, sacrifice, and love.
*******
This is the first book that I could not finish this year and quite frankly I’m annoyed with myself for not finishing. However I have to be really honest and admit that this book bored me senseless. To the point, it has made me reluctant to read anything, because I felt like I invested so much time in this one book, attempting to plough myself through.
I don’t want to stand here and criticise Veronica Roth, because I do think she is an extremely talented author. The first book, Divergent, blew me away and I enjoyed the second book, Insurgent, but this book left me unimpressed. For nearly two hundred pages into the book, nothing really happens. I didn’t feel as though the  plot or the characters really moved forward in the story and I lost interest. I actually got to the point where I really didn’t care what happened in the end and I rarely give up on books!
I really think that this series would have been stronger and more action packed if it had been a dualogy instead of a trilogy. There wasn’t enough in the plot to fill a trilogy.  If that had happened, I don’t think I would be writing this post now.
So apologies to all of you who loved it and everyone who urged me on to the end; all I can say is this book wasn’t for me.
at November 16, 2013